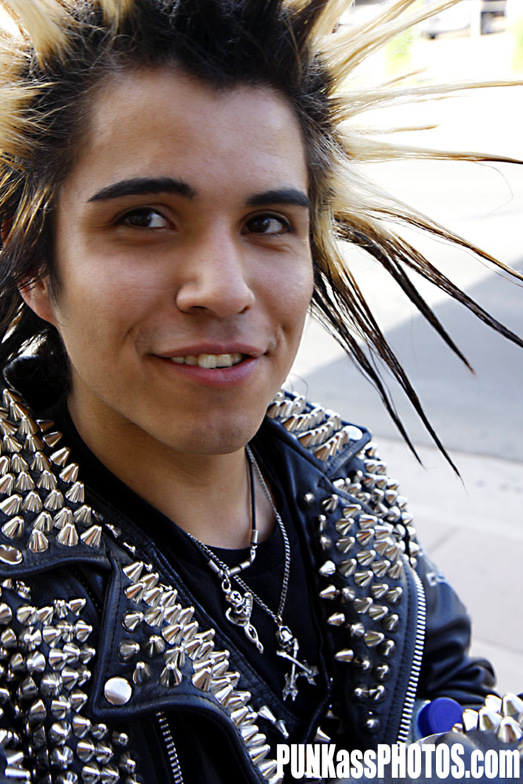 Have you noticed that people who are different often experience forms of exclusion or hostility? Why?

A skinny young male is walking in a shopping mall.

He’s wearing tight black jeans with laced black leather boots extending to mid-calf, and a baggy black leather jacket covered with hundreds of studs. He has piercings through his lower lip, the septum and bridge of his nose, both eye-brows, and his ears. Tattoos peak from under his sleeves and above his collar. He is crowned with a Mohawk-like haircut, arranged in a series of seven inch glue-maintained spikes dyed a pinky-orange hue.

How do people react? How would you react?

The reactions will range from positive to negative. What determines a particular individual’s initial reaction? Is it fear, curiosity, disgust, sympathy, rejection, acceptance, or something else? And what informs or energizes those reactions?

Most probably, people would not even notice the hundreds of others they passed in the previous hour that looked and acted just like them. They notice the one individual who stands out as different from their common identity.

Identity is how a person or group answers the question, “Who am I?” or “Who are we?” Identity is usually rooted in values, beliefs, and convictions; it is expressed in actions and words.

Sometimes the identity of followers of Jesus conflicts with the identity of the dominant culture in which they live. This does not mean that Christians are different in everything, after all they live in that dominant culture sharing its language, traditions, foods, and clothing styles. As such they are usually indistinguishable from any other inhabitant – except when it comes to those values, beliefs, and convictions that mark loyalty to Jesus Christ as Lord.

Miroslav Volf confirms this: “At the very core of Christian identity lies an all-encompassing change of loyalty, from a given culture with its gods to the God of cultures.”[1]

On the night prior to his crucifixion, Jesus reminded his disciples: “Remember the word that I said to you: ‘A servant is not greater than his master.’ If they persecuted me, they will also persecute you. If they kept my word, they will also keep yours” (John 15:20).

As our identity is defined by Jesus Christ, our loyalty to Jesus Christ will lead us to be different within our cultures – just like Jesus was different in his culture. Cultures often react to such differences with persecution.

Here’s a historical example. Polycarp (70-155 A.D.), discipled by the apostle John, refused to offer a token pinch of incense before a statue of Caesar and proclaim “Caesar is lord.” He stated, “Eighty-six years I have served Christ, and He never did me any wrong. How can I blaspheme my King who saved me?” Polycarp refused to compromise his loyalty to Jesus Christ and this was a point of difference with the culture of 2nd Century Rome in which he lived. As a result, he was burned alive at the stake.

In Their Blood Cries Out, Paul Marshall writes that more than 200 million Christians around the world suffer imprisonment, abuse and even death because of their faith. He concludes that more followers of Jesus were killed for their faith in the 20th Century than the preceding 19 centuries combined.[2]

Today, followers of Jesus throughout the world refuse to compromise their loyalty to Jesus Christ. This results in different forms and degrees of persecution including ridicule, loss of opportunities, imprisonment, abuse, and even death. In our western cultures the reactions to loyalty to Christ are typically derision, exclusion, or some other form of marginalizing. How does a follower of Jesus deal with persecution?[3]

Like most Christians in the West, I lack experience of intense or physical persecution. However, here are three observations drawn from the New Testament.[4]

First, is the recognition that persecution for genuine loyalty to Jesus Christ is not new or even uncommon. Yet we may ask, “Why is this happening to me?”

Second, is the attitude toward the persecution.

For instance, when the apostles had clearly acted and spoken boldly in loyalty to Jesus Christ they were persecuted by the authorities (see Acts 5:12-42). The Jewish council “beat them and charged them not to speak in the name of Jesus, and let them go” (5:40).

Note their stand toward this persecution: “Then they left the presence of the council, rejoicing that they were counted worthy to suffer dishonor for the name. And every day, in the temple and from house to house, they did not cease teaching and preaching Jesus as the Christ” (5:41-42). They did this in community – a “Jesus community.”

They were not discouraged or intimidated by the persecution; rather they rejoiced and kept being loyal.

Third, is the attitude toward the persecutors.

I have found these directions of Jesus to be of great practical help for this attitude: “I say to you who hear, Love your enemies, do good to those who hate you, bless those who curse you, pray for those who abuse you” (Luke 6:27). How do we do this?

He is a response of obedient faithfulness endorsed and empowered implicitly by the Spirit of Christ.

He calls us to act intentionally. When we are aware that our enemy has a need, we are to “do good to those who hate you.”

He calls us to speak intentionally. When someone speaks against us – falsely, derisively, hatefully – we are to speak well of them: “bless those who curse you.”

It calls us to think intentionally. When we think about a situation in which we have been unjustly accused or wrongly treated, emotions such as anger, resentment outrage, and hate may boil up inside us. Jesus leads us to “pray for those who abuse you.” Perhaps the prayer asks that I be empowered to love that person with the love of Christ, or that the person be led to repentance toward God and faith in the Lord Jesus (Acts 20:21). You will be encouraged as the intentional activity of praying for the abusive individual or group displaces destructive thoughts and emotions.

Reflection: Take time to consider how you have experienced persecution. Ask yourself, "Has the persecution been a reaction to actions or words of my genuine loyalty to Jesus Christ, or has it been the result of my own ideas, values, or wrongs?"

In situations of reactions of culture toward my actions or words of loyalty to Jesus Christ, how have I responded – have I re-acted in anger or outrage, or have I acted by initiating actions of good, words of blessing, and attitudes grounded in prayer?

How can I move toward the attitudes, words, and actions to which Jesus calls me?

Next week I plan to explore this theme a bit more.

Please consider becoming part of the virtual community of living theology. You can do this by subscribing to the site.

[3] I assume that the cultural reaction is because of actions or words engendered by a genuine loyalty to Jesus Christ, not because of one’s sinfulness, ignorance, or other blameworthiness.

[4] The painting reproduced in this blog is Persecution by Jani Freimann fromhttp://fineartamerica.com/featured/persecution-jani-freimann.html. The other images are fromhttp://www.google.com/imghp.