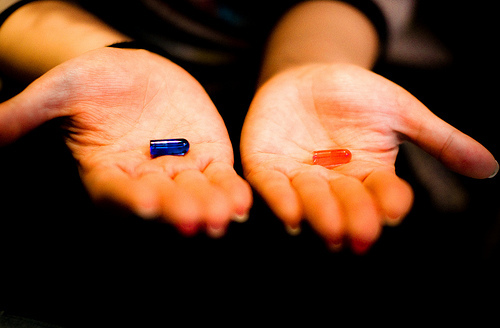 Mine is probably the science fiction action thriller The Matrix.

In that film, humans go about their normal lives – at least that's what you think at first. You learn that they are simply living in a virtual world created by a gigantic computer – the Matrix. Humans actually exist in a coma, each in an individual pod or cocoon, functioning as battery-like power sources for the computer.

Our hero, 'Neo' (Keanu Reeves), is suspicious about the 'reality' of life. He searches for, and meets, 'Morpheus' (Laurence Fishburne). 'Morpheus', like an evangelist, presents 'Neo' with a choice: a blue pill to forget the truth, or a red pill. Choosing the red pill, 'Neo' awakens and the Matrix expels him through, what looks like, a birth channel. The remainder of the movie is 'Neo' discovering his real identity.

So far, in our examination of rest, or Sabbath, we have been dabbling in the virtual world. Let's look at what a 'red pill' will show us about Sabbath.

I want to make four points: the first two will raise questions about reality – and the vexing issue of the law; the second two call for action – which 'pill' will you choose?

First, "Christ is the end of the law so that there may be righteousness for everyone who believes" (Romans 10:4 NIV). The word "end" translates the Greek word telos which carries the idea, not of cessation, but of goal or result.

A telos is like the terminus of the trans-Canada railroad in Vancouver. The railroad serves its purpose by bringing a traveller to the goal of Vancouver. Once the traveller arrives at the right destination the railroad isn't needed.

Jesus Christ is the telos or goal – he is righteousness to everyone who believes.

The first use of the word Sabbath occurs in Exodus 16. Arguably this is the first Sabbath. It was for Israel. The two statements of the ten commandments include the Sabbath (Exodus 20:8-11; Deuteronomy 5:12-15) – this was also for Israel.

The law was used by Israel to define boundaries separating itself from the rest of humanity. These boundaries included male circumcision, dietary regulations (kosher or clean foods), and Sabbath.

Since Jesus Christ, male circumcision, kosher vs. unclean foods, and Sabbath are matters of indifference to God.

If you choose to eat, or not to eat, prawns, pork, or penguin (actually I'm not sure I would eat penguin) – it is not a matter of righteousness before God. Right relationship and living with God is attained only through Jesus Christ.

Second, Christ is the reality. This is confirmed by Colossians 2:16-17: "... do not let anyone judge you by what you eat or drink, or with regard to a religious festival, a New Moon celebration or a Sabbath day. These are a shadow of the things that were to come; the reality, however, is found in Christ" (Colossians 2:16-17).

The Sabbath (among other Jewish festivals) was only a shadow.

On a bright day, objects cast shadows. The shadows cast an outline of the object, but they are not the object.

The Sabbath (among other Jewish festivals) is a shadow – it is not the reality. Jesus Christ casts the shadow of Sabbath – he is the reality.

As 'Neo' was suspicious about apparent 'realities', are you now wondering about the nature of Sabbath? If it isn't a day of rest during the week, what is it? Is there any concept of 'rest' provided by God?

Third, Jesus is our rest. What does that mean?

Since the seventh day of Creation there has been something called 'God's rest' (Hebrews 3:7-4:11).[1] People have failed to enter that rest because of unbelief and disobedience. Even during the Exodus, there were those of Israel of whom God says "I declared on oath in my anger, they shall never enter my rest" (Hebrews 4:3-4 quoting Psalm 95:11).

Jesus Christ fulfilled the divine requirements of righteousness – including Sabbath. Those who have believed in him "have come to share in Christ" (Hebrews 3:14).

'Neo' chose the red pill and experienced a "new birth-like" event. That is a metaphor for those who choose Jesus and experience a new birth event. (See "Who Am I? – Part 4" for a life-illustration of this event of new birth).

Fourth, the 'rest' in Christ is 'already but not yet.' Again, what does that mean?

Rest in Christ is something that will be fully experienced in the future when Jesus returns physically to Earth. To that extent it is 'not yet'. However, it is also true that those who are 'in Christ' and are becoming 'like Christ' can experience this rest 'already'.

The present experience of this 'rest' flows from our active responses to the Lord Jesus. Hebrews 4:11 states: "Let us, therefore, make every effort to enter that rest ... ." I propose a few examples of what it means to "make every effort," or to respond actively:

As for humility, Peter writes:

Humble yourselves, therefore, under God's mighty hand, that he may lift you up in due time. Cast all your anxiety on him because he cares for you (1 Peter 5:6-7).

As for prayer, Paul writes:

Do not be anxious about anything, but in everything, by prayer and petition, with thanksgiving, present your requests to God. And the peace of God, which transcends all understanding, will guard your hearts and your minds in Christ Jesus (Philippians 4:6-7).

There are other areas in which we can experience genuine rest 'in Christ'. Perhaps you will share your ideas and experiences with us.

When we begin to realize what a person has 'in Christ' then rest, or Sabbath, becomes much more than simply taking time away from work – it becomes a living experience of entering into a closer relationship with God.

[1] Throughout this blog I am informed in part by the fine article of A. G. Shead, "Sabbath," in New Dictionary of Biblical Theology, ed. T. Desmond Alexander and others (Leicester, UK/Downers Grove, IL: Inter-Varsity Press, 2000), 745-750.