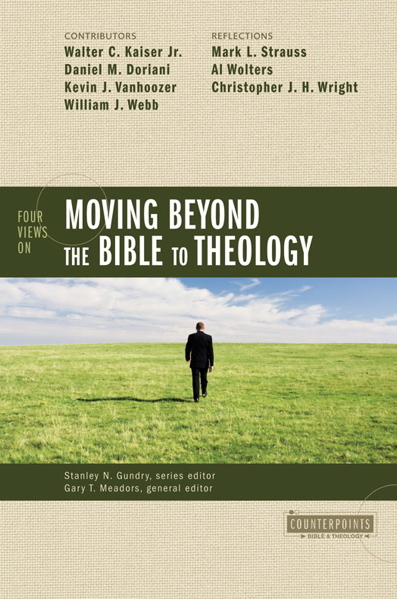 How do we move beyond the Bible to theology and ethics?  In other words, how are we to live faithfully and competently in modern situations that do not appear to be specifically addressed in the ancient and holy text of the Bible?  In this accessible book a number of qualified contributors grapple with this important, complex and timely question.

Gary Meadors does an able job introducing us to some of the issues, such as moving from direct teaching to implied teaching to creative constructs (10).  Central questions he asks for us include “How do we move legitimately to creative constructs that inform how we ought to live?” and “How can we properly distinguish normative or ‘timeless’ truths from cultural or traditional expressions?”

For those unfamiliar with this popular and useful format, it presents various significant positions on a topic in which differing views are held.  After each presentation, the other conversation partners respond and interact with each other in a collegial and informative manner.

The participants in this “conversation” are Walter Kaiser presenting a principlizing model that attempts (as its name implies) to extract abiding principles from the text of Scripture and to apply them to particular present situations; Daniel Doriani proposing a redemptive-historical model that puts forth an exegesis more sensitive to the unfolding narrative of redemption; Kevin Vanhoozer inviting us into a theo-drama of redemption referred to as a drama-of-redemption model; and, William Webb offering a redemptive-movement model that seeks to identify redemptive progress towards an ultimate ethic.  By no means should we conclude that these are the only views that could be involved in the debate.

As evangelical scholars, these contributors accept the authority and reliability of the Bible (14f.).  Certain presumptions are also implicitly adopted including the continuing relevance of Scripture to the faith and practice of the believing community.

Each offering has strengths and weaknesses.  For instance, Kaiser’s principlizing model has several attractive features but one wonders whether it is as simple (viz., “the Ladder of Abstraction”) or as objective as proposed.  Doriani employs careful exegesis but how is one assured of identifying the correct trajectory from the narrative?  Vanhoozer’s approach recognizes a meta-narrative but relies on metaphors (e.g., drama) that may not be able to bear the weight demanded of them.  Webb’s “redemptive movement” encouragingly takes the reader to territory beyond mere hermeneutical mechanics but may leave one with few clear biblical landmarks.

A useful bibliography, scripture index and subject index are provided.  However, it is unfortunate that the contributors did not intentionally employ more subjects or texts in common.  Such comparative demonstrations could have helpfully illustrated how their respective approaches differ from each other, and how they are to be applied to present situations.

A bonus in this volume is the addition of insightful reflections on the conversation in general, and these models in particular, by Mark Strauss, Al Wolters, and Christopher Wright.  These reflections confirm that the models are not mutually exclusive and that each equips us for the hermeneutical task.

Although this book may leave a reader unsatisfied it serves a useful purpose in making us more aware of the issues, complexity and importance of the undertaking of moving beyond the Bible to theology.  All-in-all, this is a stimulating and profitable introduction to moving from the “then and there” of the biblical text to “here and now” of faithful living.