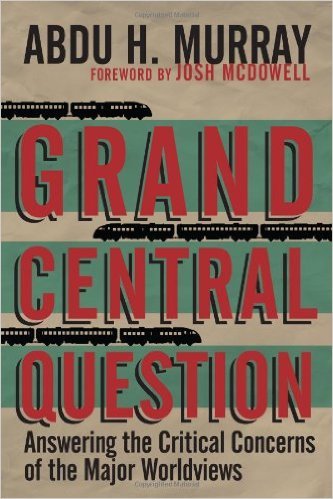 In each section, his aim is to explore whether each worldview possesses the necessary means to solve its own concerns. He then contrasts each worldview with the Gospel, and seeks to demonstrate how the Gospel offers much more satisfactory solutions.

I can't help but compare this book to Ronald Nash's Worldviews in Conflict, written about 25 years ago. It was still in a Cold War context, still subscribing to a modern mindset. It primarily dealt with logical atheistic arguments, lacked depth in its analysis of New Age, and did not even touch on other religions. Instead, his aim was to prove a Theistic worldview (not differentiating Christianity from other theistic religions).

In contrast, Murray offers the experience of a converted Muslim, educated in the United States as a lawyer.

In dealing with Secular Humanism, he identifies their central concern to be the inherent value of human beings. By interacting with the writings of New Atheists, humanist societies, etc, he demonstrates that their desire for meaning, purpose and value is groundless - while the Gospel provides the necessary foundation for morality and the value of human life.

In dealing with Eastern/Western Spirituality, Murray offers surprising insights. He demonstrates that much of this philosophy is rooted in the pantheism of Hinduism. He clarifies a muddy mixture of philosophical beliefs by identifying common themes: desire leading to suffering, resulting in karma, and the aspiration to escape the "illusion" of bodily, individual existence through emptying oneself of desire, enlightenment of one's divinity, and ultimately, becoming nothing and all at the same time. In contrast, he offers the Gospel as a compassionate alternative that recognizes the reality of suffering, and offers a real solution.

Finally, Murray deals with his religion of origin, Islam. He demonstrates, in great detail, how the Qu'ran affirms the inspiration and preservation of the Bible, and then shows how the two sacred texts contradict each other when it comes to the nature of God. The Muslim idea of God is so transcendent that it is impossible for Him to be known and loved. Moreover, without the Trinity, they are mired in tension between God's justice and mercy - only the Gospel demonstrates how God can uphold justice while offering mercy.

All in all, this book was very informative, and left me satisfied in the areas it covered. I would highly recommend it as a resource to deal with the most current issues of belief today.