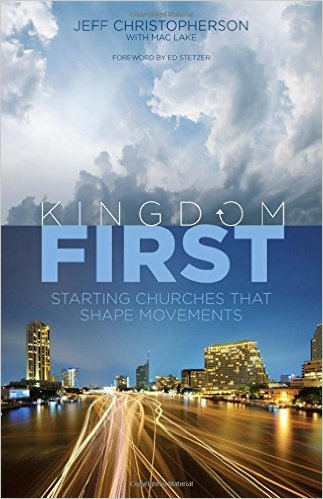 Having read Jeff Christopherson’s previous book, Kingdom Matrix, I picked up Kingdom First with anticipation. I was not disappointed.

In his newest offering, Jeff has built on the earlier foundation providing additional biblical concepts with practical insights that have been field tested.

Jeff Christopherson is the vice-president of Send Network for the North American Mission Board. Prior to that he has served in pastoral and church planting works in his native Canada. Both he and Mac Lake bring a wealth of practical experience to the subject of this book.

Christopherson begins with a criticism of an often unspoken, yet prevalent, attitude of churches. He couples this criticism with a way forward that is the purpose of this book. He writes, “We too often design churches as if they were the ‘end’ in and of themselves. Inherent in that idolatrous design is a deviant, sacred darkness that the harvest finds entirely repelling. This book is about crafting a new [kind of] church for the Kingdom of God” (1).

The book is divided into eight parts, each of which is composed of three to five chapters about a material component of his church building paradigm. They are presented as sequential or progressive components (i.e., 1 leads to 2, 2 to 3, and so forth).

These eight components are:

There are a number of things that make this book of great valuable for church planting.

First, the main thesis is Kingdom of God first – not church first. This sets churches within a larger and enduring context, with all that implies for issues such as vision, co-operation, and denominational priorities.

Second, the general approach is paradigmatic, not programmatic. This is not a book about a one-size-fits-all model. It recognizes the need for contextual awareness, adaptation, and wisdom without compromising the core message of the Gospel.

Third, the eight components are presented with not only a sound theological grounding, but also an insistence on practical growth and expression. Resources are identified by way of example or suggestion, allowing for discernment of the suitability of those resources within a particular context.

I will mention two criticisms.

First, despite the welcomed shift toward a paradigmatic approach, my sense is that the book retains an American evangelical flavor. Of course, this is the primary market for the book – but that brings limitations. A couple of examples will suffice. The use of the “3 Circles Life Conversation Guide” (114) may not be useful in honor-shame or power-fear cultures. The somewhat enculturated references to “consistent team meeting schedule,” “once a month use thirty minutes of your regular meeting for leadership development” (156f.) echo a prevailing mentality for a type of leadership that may not be consistent with the context of a church plant.

Second, there is insufficient explanation of why these eight components were selected and put in their order. I suspect they are based on the authors’ experience. Although the “kingdom first” principle is a great starting place, is there a logical ordering to the sequence of the other seven components?

A fuller explanation would be useful for equipping church planters to identify when a transition is taking place, or when it should be set in motion.

Overall, these criticisms are minor in light of the valuable contribution this book makes to church planting and church health. I give it 4 to 4.5 stars out of 5.

This book deserves a wide and careful reading. I recommend it to all existing and aspiring church planters, evangelists, and disciple-makers, as well as other congregational and ministry leaders.