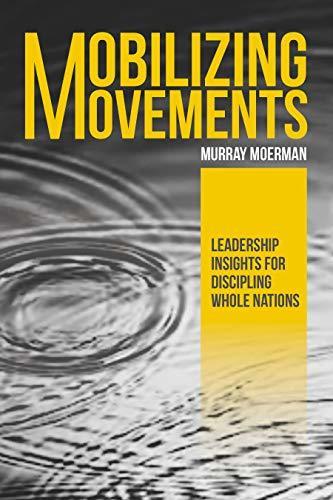 The “big idea” of his book is “the vision of mobilizing the ‘whole church’ to disciple the ‘whole nation’ by placing a transformative church inhabited by the risen Christ within reach of every person.” (7)

The book is structured in four parts consisting of 21 chapters. Part 1 is intended as an overview followed by groupings of chapters that move out in larger concentric circles: “starting where you are,” “components of national vision,” and “where to … globally.” In addition, there is a glossary of some terms, seven appendices, and numerous tables and figures.

MM provides a needed corrective to the limitations of churches caught in a Constantinian culture and structure with its clergy/laity distinction and “the budget priority of buildings, programs, and salaries” (xiv). This corrective comes in the form of small groups of committed and strategically-placed visionary leaders within a nation to engage Christians in planting churches to make disciples and reach the whole nation. Toward this end, MM provides insights into some lessons learned (chapters 2-5), practical wisdom (chapters 6-8), the challenges of long-term work in the nations (chapters 9-16), and fruitful interaction between national and church-planting facilitators (chapters 17-21). Throughout, MM’s passion for his subject is evident.

Despite the laudable aims of this project, I have a few criticisms of its presentation. Here are three.

First, MM fails to define some key terms. Two such omissions are his working definitions for “disciple” and “evangelical.” As disciple-making is an integral part of his thesis, he needs to describe what he means by a disciple. This is especially necessary given his criticism of typical “discipleship” concepts (13), his implication that potential converts need to be discipled (33, 35), and identifying successful disciple-making (62). Similarly, the term “evangelical” is undefined even though it is used as a benchmark for distinguishing “unreached,” “unengaged,” and “least-reached” people groups (38), and in other significant contexts (e.g., 90, 127, 144, 147, 209).

Second, there is a tendency toward the use of jargon. For example, what is “passive siloing” (85) or the meaning of the Greek word oikos (12, 31f.). What is meant by “saturating” and “lighthouses” in this sentence: “Connecting Christians who see the value of this to saturate their neighborhoods also with lighthouses could be a next step.” (20)

Third, numerous times I re-read sentences trying to make sense of them. For instance, “Initiative for a national process may have to wait for newer emerging leaders who, in a culture which hammers down nailheads [sic] sticking up even a little, were so forged for comparatively fewer years than their elders.” (82) What or who was forged?

Unfortunately, these kinds of issues detract from the usefulness and readability of this book. Nevertheless, this text is full of wisdom, information, ideas, structures, and other resources. As such, Mobilizing Movements is an asset for those engaged and interested in church planting, evangelism, and missionary endeavors.

Disclosure: I received this book free from the publisher. I was not required to write a positive review. I rate this book as three out of five stars.

Here is the link to an interview with Murray Moerman from the Outreach Canada website (13:20).