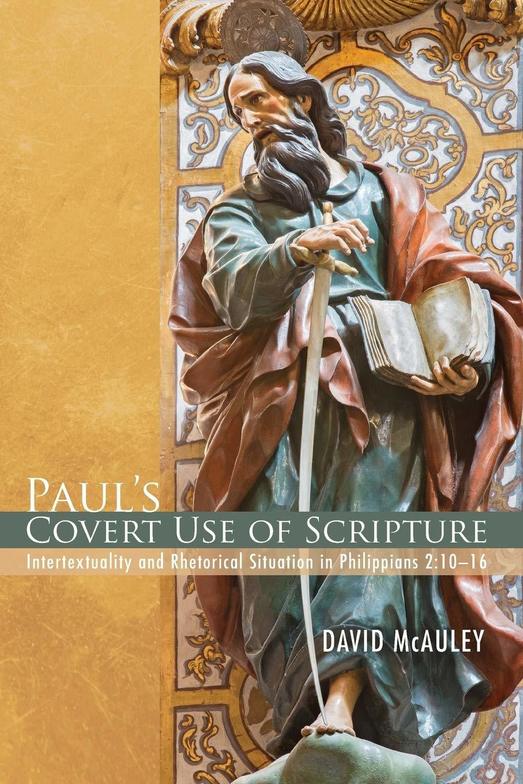 David McAuley is a visiting lecturer in New Testament and an itinerant preacher. He was awarded a PhD in Biblical Studies from the University of Aberdeen in 2010. This book is his doctoral dissertation with minimal revision.

In Chapter 1, McAuley introduces the project. His proposal is that “Paul intentionally authored a cluster of literary allusions to Scripture in Phil 2:10-16” (50). To test this claim he poses six necessary questions (7-8):

2.    How are allusions defined and interpreted?

3.    What special consideration, if any should be given to the interpretation of a cluster of successive allusions, most of which occur in a single sentence?

4.    Given that allusion is a form of tacit reference, how can its interpretation be reasonably (exegetically) constrained?

5.    What role should audience recognition and authorial intention play in our analysis of Paul’s use of allusion?

6.    What role does epistolary argument play in the interpretation of allusions?

The significance of each of these questions is carefully explored and applied. For instance, on the important issue of constraints (i.e., questions 4 and 6), identifying the “social (rhetorical-contingent) situation [of the epistle becomes] the means of constraining intertextual interpretation” (33).

Chapter 2 presents and appraises “the theories and methods that are particularly appropriate for testing the proposal that Paul intentionally authored a cluster of literary allusions to Scripture in Phil 2:10-16” (50). This explores relevant theories in both rhetorical criticism and intertextuality – with pride of place (I think) being given to Lloyd Bitzer in the former, and Ziva Ben-Porat in the latter.

This material is thorough, accurate, and densely packed. As such it is challenging and requires careful reading.

McAuley begins at Phil. 1:27-30 stating, without sufficient explanation, that it is “[a] good place to start” (90). I found it a bit surprising that he did not include the thanksgiving – prayer section (1:3-11) in this analysis, as a thanksgiving – prayer section is generally acknowledged to give clues to the situation and vital theme of an epistle.

Nevertheless, I found myself accepting that the author was making a strong case, and that I was in substantial agreement with his conclusion. The conclusion: “God approves of suffering and death for the sake of Christ … is an expression of the epistolary argument, central theme or rhetorical situation and brings the passage into unity and significance” (159).

Chapter 4 examines the five OT allusions referred to earlier. McAuley asks two questions of each: “In what way could the alleged alluded-to text be a variant on the rhetorical situation? Why does Paul use this particular alluded-to text?” (163).

This, for me, paid rich dividends for my investment in chapter 2. It is here that I was able to see the fruits of McAuley’s methodology.

As an example, McAuley devotes 21 pages of intertextual exegetical analysis to “fear and trembling,” concluding that the phrase in Philippians 2:12 is an allusion drawn from Psalm 2:11. He does not stop there. “Fear and trembling” is no mere proof text or literary coincidence. McAuley argues convincingly, in my opinion, that the allusion draws the whole context of Psalm 2 into the rhetorical situation of Philippians. This results in the fresh and insightful understanding that such “fear and trembling” is “characteristic of an act of allegiance to an enthroned king whose enemies did not recognize or submit to his rule” (197).

I comment briefly on three benefits of this book.

First, McAuley has made a valuable contribution to intertextual, or inner-biblical, studies. Among other things, he demonstrates that the apparent cluster of tacit references to the OT in Phil 2:10-16, far from being vague, random, or coincidental, is intentional (246) and “functions as a group of literary allusions that are integral or foundational to Paul’s epistolary argument” (243).

Among other things, he also adds to the conversations on intertextuality respecting the presence or absence of specific formal citations; and, the presumed competence of an implied audience to identify and understand the intertextual allusions.

Second, is the work’s influence on the study and understanding of the Philippian epistle.

McAuley’s discussion and analysis of the rhetorical situation of Philippians moves beyond common, and relatively surface, issues such as unity. The result is a deeper understanding of the epistle and Paul’s use of OT intertextual quotations and allusions.

Third, is a tangential benefit regarding the theology of suffering for the western church.

Ajith Fernando, a Sri Lankan theologian, writes in The Call to Joy and Pain that “one of the most serious theological blind spots in the western church is a defective understanding of suffering.” By proposing the rhetorical situation of Philippians as he has, McAuley is providing an accessible and necessary corrective on suffering for we who are the modern western church.

Professors, teachers, and advanced students, as well as those with a developed interest in Philippians and intertextual studies, will find this work lucid, thorough, and valuable.