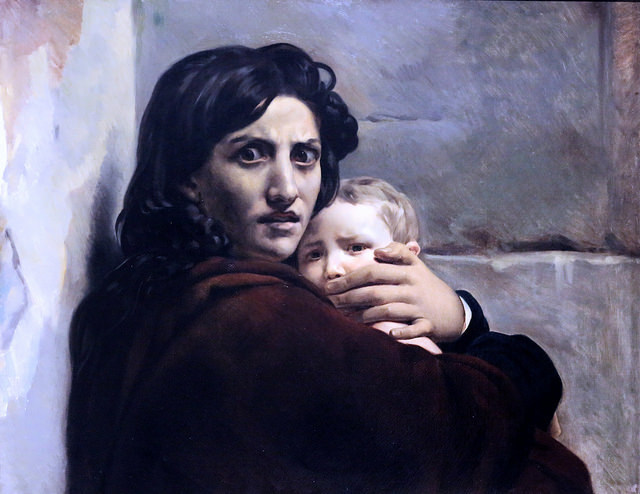 We normally hear, "Let's put Christ back into Christmas."

Some time ago I read J. Richard Middleton's article, "Let's Put Herod back into Christmas." We'll come to his article in a moment.

Matthew 2 is one of those parts of the Bible you should read during the Christmas season.

The chapter is full of traditional Christmas images:

These are familiar scenes in most Christmas presentations.

Read beyond Matthew 2:15 and you're in for a shock. That is not suitable material for sanitized sermons and Sunday School plays.

In many ways, our sanitized versions of "Christmas" separate us from the realities of Jesus and the circumstances of his conception and birth.

When Herod realized that he had been outwitted by the Magi, he was furious, and he gave orders to kill all the boys in Bethlehem and its vicinity who were two years old and under, in accordance with the time he had learned from the Magi.

Herod's fury exploded as an indiscriminate murder of infants.

Look at the image (above) of a mother attempting to protect her child. What feelings are evoked?

What have we done with Christmas?

If Christmas is about the birth of Jesus Christ, we need a renewed dose of reality.

Our cultures have redefined Christmas. It has been flattened, sanitized, commercialized, and distorted.

In the same way that colorful eggs and fluffy bunnies are allowed to hijack the celebration of Jesus being raised from the dead at Easter; evergreen trees and a jolly overweight guy in a red suit are superimposed over the event of Jesus being born.

The reality is that Jesus was a vulnerable infant in the harsh environment of 1st Century Palestine during the iron rule of Imperial Rome.

It is this reality that connects us with the world in which most live—whether it is the reality of unemployment and homelessness in our cities, hunger in Africa, or hate in Syria and elsewhere.

With this in mind, and with the kind permission of J. Richard Middleton, I have reproduced his excellent article on this theme. It calls us back to reality and is a necessary corrective to our sanitized versions of the birth of the Lord Jesus Christ.

As long as I can remember, I’ve heard Christians bemoaning the commercialization of Christmas, the mad rush to buy gifts, the annual spending frenzy. “Let’s put Christ back into Christmas” was their recurring refrain. Although I’m sympathetic with the genuine concern here, I think it’s misplaced.

The commercialization of Christmas doesn’t actually exclude Christ. He’s there in the manger scenes we know and love, even in department stores and shopping malls. The Christ-child lies blissfully in a decorative, gilt-edged manger lit by neon and flashing colored lights, while the muzak drones, “Sleep in heavenly peace.” The problem is not that the commercialization of Christmas has displaced Christ. The problem is that this Christ doesn’t match the biblical portrayal. According to Matthew, Jesus did not sleep in heavenly peace. On the contrary he slept—if at all—in the midst of great danger and death. It’s difficult to sleep when you’re a refugee, fleeing for your life. It’s difficult to sleep with Herod around.

Unfortunately, the Christ that many Christians want to put back into Christmas tends to be a sentimentalized figure, strangely removed from the world of Herod—the real world of pain and brokenness. And so this Christ is largely irrelevant. A baby sleeping in heavenly peace is irrelevant to anyone grieving the loss of a loved one, to anyone who’s been sexually abused, to anyone living in a war zone. He’s irrelevant to the unemployed and the underemployed, to those struggling with doubt and disappointment. He’s certainly irrelevant to anyone sleeping downtown on a heating grate this winter. Tear-jerking manger scenes and soothing Christmas carols just don’t cut it in a world that’s full of the reality of Herod.

This is not to deny the traditional picture of the Christ-child lying vulnerable in Bethlehem with the wise men bringing gifts. But it’s important not to miss the point Matthew makes (quoting Micah) that the Messiah was born in small-town Bethlehem (no-place, Judah) because God bypassed glorious Jerusalem, the great city, where Herod ruled. And God bypassed Herod, king of the Jews, and chose to work through a poor peasant couple and a child of questionable birth-status.

And who comes to worship the child? Not Herod, nor any Jewish religious leaders, but pagan astrologers. This baby lying vulnerable in Bethlehem was perceived rightly by these “wise” pagans to be the true king of the Jews, whose birth had such cosmic significance that there was a new star in the heavens. Herod himself rightly perceived this baby lying vulnerable in Bethlehem to be a threat to his pretensions of power. So threatening, indeed, as to justify the frenzied slaughter of innocent babies.

This doesn’t mean we should never enjoy manger scenes or get teary-eyed when we sing carols or watch the kids acting out the nativity story. But let’s never forget why God showered his unfathomable love upon us at Christmas two thousand years ago: because he cared so much for our wounds, and for this suffering world, that he personally entered the fray, this bloodbath we call history, to redeem us—and history—from the bloodbath.

The fact is that Herod is integral to Christmas, because Herod places the birth of Jesus squarely in history. At one level that’s literally true. We date Jesus’ birth between 6 and 4 B.C. because Herod died in 4 B.C. and he ordered the slaughter of children under two. Herod places Jesus chronologically in history. But Herod also places Jesus in the harsh reality of history. Jesus didn’t come into some mythical, storybook, never-never land. He came into the world of Herod. The world we know only too well.

And he came to take Herod out. That’s what Christmas is all about: the decisive blow God dealt to evil, injustice and suffering at the cross. But it started in Bethlehem, when a baby lying vulnerable in a manger threatened a tyrant. Can we, like the wise men, discern the cosmic significance of that this Christmas?

How does the harsh reality of Matthew’s record re-connect you to the real world, real people—and the real Jesus?

After you’ve read it, let me know what you think.

BACK TO Why Shepherds at Bethlehem?