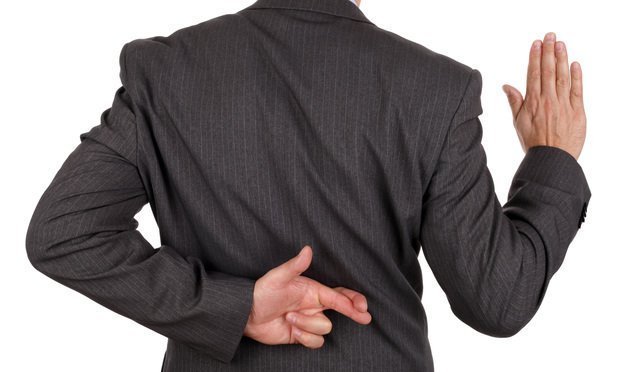 While waiting for a witness, a court reporter asked me what the Bible said about swearing oaths. Over the years he had seen many witnesses take an oath “to tell the truth, the whole truth, and nothing but the truth,” and then lie.

Lying under oath is not a new problem.

In the Sermon on the Mount, Jesus relates the traditional teaching from the Old Testament: “… you have heard that it was said to those of old, ‘You shall not swear falsely, but shall perform to the Lord what you have sworn’” (Matthew 5:33 ESV).

Jesus then identifies the vicious cycle related to taking oaths (5:34-36):

In New Testament times, Jewish people avoided taking an oath that used God’s name. Instead, they used substitutes associated with God such as His throne or His city, Jerusalem. They might even swear by their heads. The thing that they used as the basis for their oaths determined how valuable their word was – it allowed them to “duck and weave” when it came to doing (or, not doing) what they had sworn.

Today people “swear on their mother’s grave” or “swear on a stack of Bibles.” People take oaths; then they lie.

As pointed out by Glen Stassen, Jesus taught his disciples a transforming initiative (5:37):

Let what you say be simply ‘Yes’ or ‘No’'; anything more than this comes from evil.

How refreshing! Just tell the truth, and do what you say you’ll do.

James repeats Jesus’ transforming initiative. He uses two sentences to teach the negative and the positive about integrity in speaking (James 5:12):

… above all, my brothers [and sisters], do not swear, either by heaven or by earth or by any other oath, but let your “yes” be yes and your “no” be no, so that you may not fall under condemnation.

When James begins with “above all,” he is putting a high value on integrity in speaking. Earlier, he dealt with the danger and damage of the tongue (see the earlier post “Moving our tongues toward wholeness”). Now, he calls Christians to speak simply and honestly.

To swear or not to swear?

Swearing and taking oaths tend toward dysfunctional speech-ethics. If we don’t speak under oath, somehow we think the threshold for truth is lower. We may also think that we can take the “edge” off truth-telling by doing something such as crossing our fingers, much in the same way the Jewish people swore by Jerusalem or their heads.

The theologian, Craig Blomberg suggests that taking an oath in a courtroom is probably not being prohibited. Maybe he’s right, but the absence of an oath should not reduce the truth of what a follower of Jesus says.

In Psalm 15, David opens with the questions: “LORD, who may dwell in your sanctuary? Who may live on your holy hill?” Take a moment to read that short psalm. Among the virtues of a co-dweller with God is the attribute of one “who keeps his oath even when it hurts” (15:4b).

Being truthful and keeping your word is speaking toward wholeness. It's a simple message we need to hear.

Reflection: During the coming week cultivate the intentional awareness of what you are saying. Are you using language that allows you to “fudge” the truth? Are you speaking honestly and simply? What does it mean to have integrity in what you say, and how you say it?