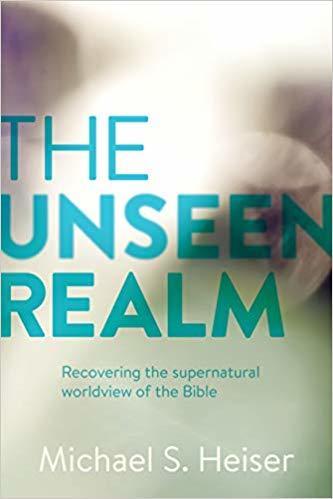 Most of us agree that there is a lot about the supernatural in the Bible. After all, within its pages, we read about God, angels, and demons, and of miracles and other wonders beyond our natural world. Yet, many of us—especially in the West—have had our senses and thinking deadened toward the supernatural by modern ideologies such as scientism, naturalism, and materialism.

The Unseen Realm enlivened my awareness and appreciation for the supernatural texts of the Bible and their significance for all of life.

Michael S. Heiser is the scholar-in-residence for Logos Bible Software. His areas of expertise are the Old Testament and its languages, which he has used to focus on the unseen spirit realm, as recorded in the Bible.

The author describes a watershed moment in his graduate studies when he carefully read Psalm 82 in its original Hebrew, which the ESV translates well.

At Psalm 82:1 (ESV), we read that “God [elohim] has taken [singular] his place in the divine council; in the midst of the gods [elohim] he holds judgment.”

Psalm 82:2-5 then critiques the failure of judgment and administration by this “divine council” and ends with (82:6-8):

I said, “You [plural] are gods [elohim], sons of the Most High, all of you [plural]; nevertheless, like men you shall die [plural], and fall [plural] like any prince.” Arise, O God [elohim], judge [singular] the earth; for you shall inherit [singular] all the nations!

Heiser’s conclusion is that God has a divine council of gods of whom he says, “like men [humans] you shall die [plural]”—implying that these “gods” are not human.

So that there is no mistake, his position in no way espouses polytheism. Heiser is emphatic that there is only one Almighty God; he also affirms the deity of Jesus Christ. The author advocates that there is a divine council of supernatural beings who administer with and under God. YHWH, the Almighty God, is the absolute and sovereign ruler.

Heiser examines about 40 “strange passages” in both the Old and New Testaments that are often “abandoned or glossed over” (19).  One such text is “let us make man in our image, after our likeness” (Genesis 1:26). What is the significance of “us” and “our” in the context of the Almighty God and his divine council? In another text, the author illuminates the meaning of Jude 1:6 in which we read, “the angels who did not stay within their own position of authority, but left their proper dwelling, he has kept in eternal chains under gloomy darkness until the judgment of the great day.” You are drawn to consider numerous puzzling texts that you probably have not explored before.

In Genesis 6:1-4 and Genesis 10-11 are two world-rebellions against YHWH that the author examines carefully. He uses these, and other texts, to build his case that the nations of the earth were apportioned among the members of the divine council or “the sons of God,” with Israel being retained by YHWH—a principle summarized in Deuteronomy 32:8-9 (cf., Acts 17:26), a text he returns to frequently:

When the Most High gave to the nations their inheritance, when he divided mankind, he fixed the borders of the peoples according to the number of the sons of God. But the LORD's portion is his people, Jacob his allotted heritage.

How is this relevant for the Gospel and the Church (all genuine followers of Jesus)? Heiser argues that through God-incarnate, the Lord Jesus Christ, redeemed humanity become the “sons of God” and will reign together with Him.

Although there are several points at which I was unconvinced, even doubtful, overall Heiser delivers on his initial promise:

“What you’ll learn is that a theology of the unseen world that derives from the text understood through the lens of ancient, premodern worldview of the authors informs every Bible doctrine in significant ways.” (13)

The material in this book is also published in a less academic version titled Supernatural: What the Bible Teaches about the Unseen World—and Why It Matters (Lexham Press, 2015). You can also watch Heiser present much of this material on Youtube.com:

The Unseen Realm is one of the most thought-provoking and thought-expanding books I have read in a while. It is a wholesome and valuable book that I recommend you read carefully and critically.