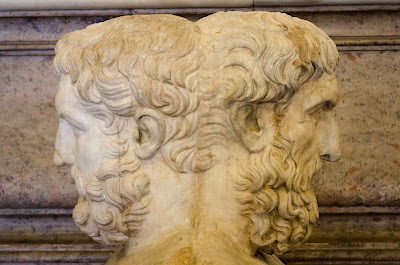 Beginning a new year is a time for reflection and resolve.

January is named after the Roman god Janus. Janus had two faces: one looking back; the other forward. It represents the transition from old to new.

In light of the looming New Year, I’ve been reading about a particular person today.

Let me be a bit more precise: He became a pivotal figure for God at a crucial time in the history of God’s people. His name was Samuel.

He didn’t begin as an effective, fully-mature person of significance – he grew into it. We first read of him as a new born – without education, strength, or position.

One thing that caught my attention about Samuel was his growth pattern in contrast to others who did have education, strength, and position (1 Samuel 2-3).

Let’s explore how these four observations integrate with beginnings and transitions in your life. I’m not referring to your physical maturing – although that may be true; I’m referring to your spiritual formation – whether you are more like Jesus today than a year ago.

Ask whether people who have known you for years are able to look at you today and discern that you have grown. As in Samuel’s case, growing is not usually observable from one day to the next. But it should be from one year to the next. Each year he needed new clothes – not simply because the old ones had worn out, but they were too small.

Have you grown in your likeness to Jesus this year? If not, I propose that there may be unhealthy circumstances in your life.

These unhealthy circumstances require diagnosis and treatment. I recommend that diagnosis begin with an honest and intense review of your life using the words of Psalm 139:23-24.

Search me, O God, and know my heart;

test me and know my anxious thoughts.

See if there is any offensive way in me, and

lead me in the way everlasting.

Such a review is serious about excising the rot of wrong thinking, wrong speaking, and wrong behaving – things that need to be removed to return us to health. At this point, a treatment of 1 John 1:9 is prescribed. I paraphrase that text for each of us personally:

If I confess, or agree with God about my sinful thoughts, words, and actions (and be specific about each of them), He is faithful and just and will forgive me my sins, and not only that, he will cleanse me from all unrighteousness.

2.         As stated earlier, the growth to which we are referring is about becoming greater, not simply getting bigger.

Bigger doesn’t mean better. I don’t wish to be offensive but in the physical realm a bigger person does not mean a healthier, better, or ‘greater’ person. The abuse of steroids, or overeating, makes people bigger but it does not make them healthier.

Some people grasp for power, influence, and control over other people and organizations – even in the church. Recently I was talking with someone about dysfunctional leadership in churches often being manifested by incompetence and control. We recognize incompetence for what it is. His comment on control was insightful – we control if we don’t have faith in the Lord’s leadership.

The apostle John puts this well when he writes: “Whoever claims to live in him must walk as Jesus did” (1 John 2:6). Our “walk” or behavior manifests our character. This involves the unspeakable “O” word – obedience.

Listening to God is most often experienced in the intentional, intelligent, responsive hearing or reading of the ancient and holy text of the Bible. Subject to that posture, it also includes ‘listening’ with discernment to others and to circumstances.

As you read of Peter’s experience in Acts 10 his orthodox understanding of Scripture was challenged and expanded by responding to God in his circumstances which included others.

It was Clement of Alexandria (ca. 150-215 A.D.) who stated that prayer was “keeping company with God.” To me, that definition is a lot better than “talking to God.” His description allows for listening and speaking, and profound companionable silence.

By analogy, healthy growth in becoming more like Jesus also includes health (e.g., the absence of sinful thoughts, words, and actions), good listening to what God says, continuous obedience to the heart of God, and wholesome fellowship with the people of God.

As you enter into the New Year, think of it as an opportunity for transitioning into true growth.

Next week, I’m going to propose a renewed discipline that will encourage true growth.