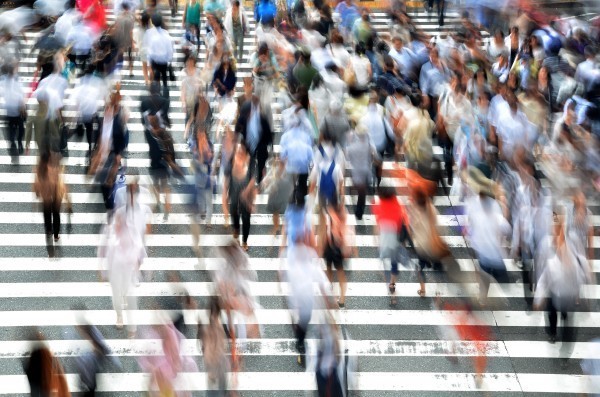 What do you think if you sit at a sidewalk café with a cup of coffee and watch people go by?

When I do this, I’m struck by the immense diversity passing before me.

Where I live there is every ethnic and cultural group represented – you name it, they’re here. Then there are the very young through to the very old, healthy and not, large and small, well-dressed and poorly – every imaginable variation of humanity.

Despite this diversity, there are many things we have in common. We all need to eat, drink, sleep, and breathe – but I have something else in mind.

I want to identify three core absolutes of our humanity, no matter who we are, where and when we live, or the culture to which we belong. These absolutes have a way of orienting us toward the humanity of others, even when we find their culture so different – even offensive.

First, a caveat that is a forthright declaration of my basic presumption.

My presupposition (and we all have them), is that the biblical record is true and reliable. This presupposition is based upon certain facts, arguments, and reasons – but I won’t go into them here.

Basically, this is an invitation to look for the answer through the lens of the Bible – what I call “God’s perspective.” From this perspective I find the way forward becomes clearer; the implications for living more obvious.

As we approach the first pages of the Bible (Genesis 1-3), it is helpful to remember that this is an ancient text, not a 21st Century scientific treatise. This in no way undermines the reliability or truthfulness of the Bible – rather it is a reminder that we need to listen carefully to what it says on its own terms, not dismiss it or distort it.

The creation of humanity in Genesis 1:26-31 is the apex of the creation account (Genesis 1:1-2:3). After God creates the universe and all other living creatures it is announced:

In the image of God he created him;

Male and female he created them.

What does it mean for us to be “image of God”? What follows is a brief summary of three inter-related responses commonly given to this question.

1.       Substantive: This means that there is something about what we are that bears characteristics of God – without being God. Such is the nature of an “image.” We are spirit, soul, and body and, somehow, that has something to do with what it is to be “image of God.”

These characteristics mean that we are theomorphic (i.e., God-shaped). As a result, we are set apart from all other creatures and are of inestimable value. Also, the constitution of humans is such that the eternal Son, Jesus Christ, could become a human without diminishing his deity.

2.       Relational:  We are wired for God, and we are designed to and for others. Each human is capable of being a nexus of relationship with God, with others, and with Creation.

3.       Functional: This is about what we do as faithful and adequate representations of God toward others and within Creation.

Functionally, relationally and substantively, the God-humanity relationship invested humans with dignity, authority, and responsibility. As “image” and “likeness” of God, humanity stood in place of God in the same manner that a royal agent stood in place of an Ancient Near Eastern king. Humans belonged to God and were to faithfully represent God within the boundaries of the mandate he had given them.

As much as we may seek to deny this “image,” but it is not erased. This is “Absolute #1”: Every human – whenever, wherever, and however they live – is wired for God, others, and Creation because each of us is “image of God.”

Genesis 3 tells the “story” of humans “stepping over the line,” or transgressing, when they did the one thing that God told them not to do. Bible scholar, Bruce Waltke, comments that that act was “essentially a breach of trust, an illicit reach of unbelief, an assertion of autonomy.” Immediately humans began to experience the effects of their alienation from God.

As for their relationship with Creation, life became hard and dangerous work. To borrow a quote, this relationship now offered blood, toil, tears, and sweat. Although Creation still provides food and other resources for life, it also unleashes destructive forces indiscriminately: tsunamis, earthquakes, typhoons, epidemics.

As for their relationships with other humans, the event in Genesis 3 set in motion all the discord and conflict we experience: strife in marriage; rivalry among brothers and sisters; hate, violence, and abuse; sickness, aging, and death. Each of us was born, and each of us will die – an unavoidable reality check for each of us.

Nevertheless, the image is not erased but it has become marred or distorted (Genesis 5:1; 9:6).

Here’s “Absolute #2”: The image we all are has become distorted or marred – we have somehow been diminished.

Here is one other absolute common to every human. I’m not sure what to call it, but I’ll attempt to describe it. This absolute hovers somewhere near our deep-rooted sense that there has to be something more than ‘this’.

If you’re like me, you sometimes wonder why bad things happen to good people, or why God doesn’t do something about evil. There are an upside and a downside to trying to answer these questions.

A downside is that when we try to make sense of “bad things” and “evil” we end up diminishing our understanding of God. Chris Wright says:

Evil has no proper place within creation. It has no validity, no truth, no integrity. It does not intrinsically belong to the creation as God originally made it nor will it belong to creation as God will ultimately redeem it. It cannot and must not be integrated into the universe as a rational, legitimated, justified part of reality. Evil is not there to be understood, but to be resisted and ultimately expelled. Evil was and remains an intruder, an alien presence that has made itself almost (but not finally) inextricably “at home”. Evil is beyond our understanding because it is not part of the ultimate reality that God in his perfect wisdom and utter truthfulness intends us to understand. So God has withheld its secrets from his own revelation and our research.

An upside to wondering about why “bad things happen to good people” is how it can expose a niggling sense embedded within our essential humanity that God’s good Creation – including ourselves – is not as it should be or could be. This sense betrays (in a good way) the illusion that there is nothing more. This sense holds out the possibility of a return to our true humanity with its proper relationship with God, with others, and with Creation.

This is not quite hope but it points toward hope. In some way, this sense is a combination of the first and second absolutes – our existence as “image of God” coupled with our distortion by sin. Deep down we somehow “know” intuitively that we are made for something more; that ‘my’ life and environment are not as they should be or could be.

Even though I don’t yet know what to call this, “Absolute #3” is the deep-rooted sense that we are made for more, and our lives are not as they could be.

In our exploration of “Christ and Culture,” we are inquiring about God, Culture, and Christians, and the dynamic among them. As such we will examine, among other things, who Jesus Christ is; what makes our various cultures what they are; and, how we live our lives within these cultures. This will require us to make certain observations, assessments, and (perhaps) conclusions or judgments.

I have proposed three absolutes:

(3) every human knows intuitively that life is not what it could be – there is something more.

Without these absolutes, our attitudes toward others become biases or prejudices based on opinions constructed by those whose feet are firmly planted in midair. In other words, they have no foundation from God's perspective. This results in hatred, alienation, violence, and a host of other undesirable emotions and reactions.

With these absolutes we have (some) boundaries of reality built on God's perspective that will serve us well in searching out answers to crucial questions. Hopefully, this will equip us to see more clearly what God intends for his people, and how they should act.

And as we are impacted by people – particularly those from cultures we do not know and may find offensive – it is good to remember that we share these three absolutes of humanity with them.

I encourage you to critique, challenge, and add to these absolutes. You can contact me here.