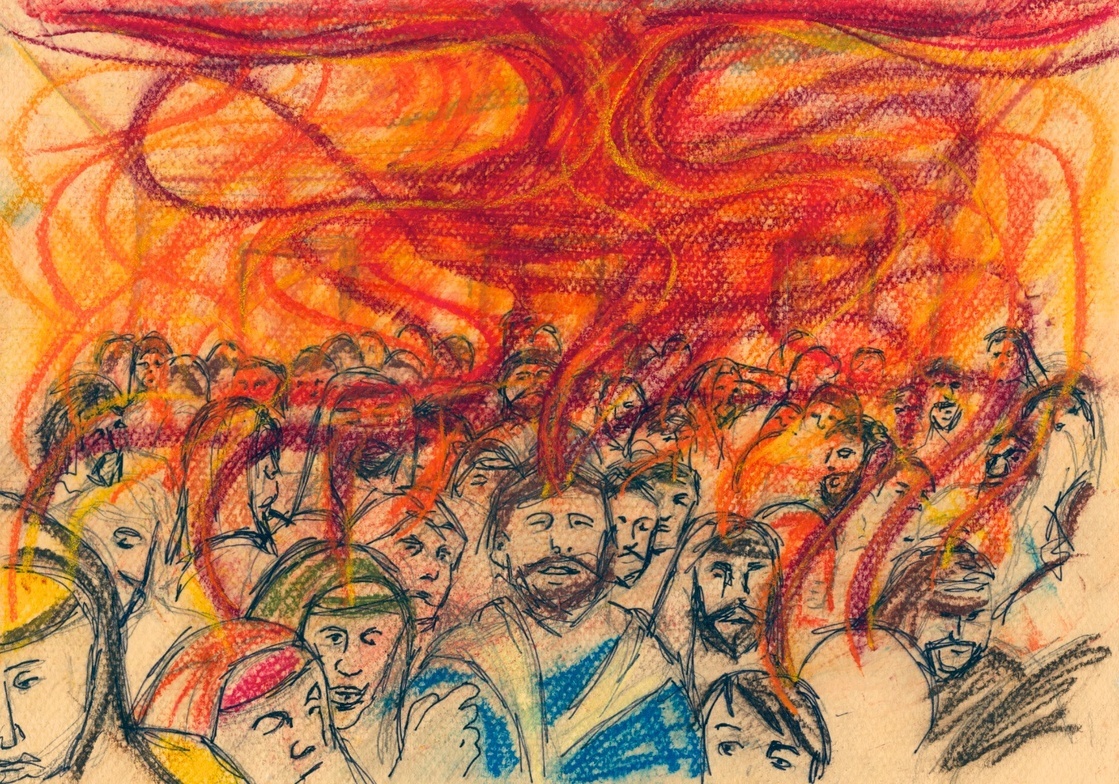 Strangely, the gift of tongues seems to be the first of the spiritual gifts unveiled.

The event is recorded in Acts 2, which I encourage you to read carefully. After all, this is the primary historical record, and anything we might say about it is secondary.

What can we learn about the gift of tongues from this debut?

The Sending of the Holy Spirit

I have included the full text of Acts 2:1-16 (NASB) in this post, and I will break in periodically to make some comments.

When the day of Pentecost had come, they were all together in one place. And suddenly there came from heaven a noise like a violent rushing wind, and it filled the whole house where they were sitting. And there appeared to them tongues [glōssa] as of fire distributing themselves, and they rested on each one of them. And they were all filled with the Holy Spirit and began to speak with other tongues [glōssa], as the Spirit was giving them utterance.

These events just happened to coincide with the annual feast of Pentecost, which (in that year) was the 50th day after the physical resurrection of Jesus Christ. This feast is one of those occasions when devout Jewish people would have traveled to Jerusalem from far and wide.

Explore the significance of this festival in “Celebrating Pentecost—even if you’re not Pentecostal.” I encourage you to pause for the moment and read or listen to that post. To listen to the audio, scroll to the end of that post and click the podcast link.

[Break to read or listen to “Celebrating Pentecost”]

Now that you have read or listened to the significance of Pentecost, you will have a better idea of the implications of these events happening during this Feast of Pentecost—it is the birth of a new era in God’s dealings with humanity.

I inserted the Greek word for “tongues” (glōssa) in the text above. You also might have heard the term glossolalia­, which combines glōssa with the verb laleō, meaning “to speak”—so, speaking in tongues.

The amazement of the crowd

Now there were Jews living in Jerusalem, devout men from every nation under heaven. And when this sound occurred, the crowd came together, and were bewildered because each one of them was hearing them speak in his own language [dialektos]. They were amazed and astonished, saying, “Why, are not all these who are speaking Galileans? “And how is it that we each hear them in our own language [dialektos] to which we were born?

“Parthians and Medes and Elamites, and residents of Mesopotamia, Judea and Cappadocia, Pontus and Asia, Phrygia and Pamphylia, Egypt and the districts of Libya around Cyrene, and visitors from Rome, both Jews and proselytes, Cretans and Arabs—we hear them in our own tongues [glōssa] speaking of the mighty deeds of God.”

And they all continued in amazement and great perplexity, saying to one another, “What does this mean?” But others were mocking and saying, “They are full of sweet wine.”

The crowd immediately realized that something extraordinary was happening. This throng was composed of Jewish people from all over the Middle East and northern Africa, as well as Rome. I count no fewer than 16 different regions or people groups represented.

This diverse group of thousands probably spoke a common language such as Greek or Aramaic. Still, they were most comfortable in their own particular dialektos—the language they knew best, which was spoken in their own country, district, or region.

Why was the whole crowd amazed and greatly perplexed?

The crowd zeroes in on the Galileans, who were the followers of Jesus. In addition, Galileans were often viewed as country bumpkins—probably with a noticeable “rough” accent.

What were these Galilean believers doing?

These “country bumpkins” were speaking in the various dialektos of the visitors, and they were declaring about “the mighty deeds of God.”

Someone says, “What’s that Galilean babbling on about? He must be drunk.”

Then someone beside him says, “No, not at all. He is speaking my native language—and he’s talking about the wonderful things God is doing!”

It does not take much imagination to picture this astonishing scene. No wonder the people were amazed and perplexed.

What did it mean?

Then, Peter stands to explain what God is doing right there, right then.

But Peter, taking his stand with the eleven, raised his voice and declared to them: “Men of Judea and all you who live in Jerusalem, let this be known to you and give heed to my words. “For these men are not drunk, as you suppose, for it is only the third hour of the day [i.e., 9:00 a.m.]; but this is what was spoken of through the prophet Joel: …

The events on that day of Pentecost are full of new life and promise. We could spend our time exploring how it was a preparation for the worldwide proclamation of the gospel, and how it reverses the judgment of Babel (see Genesis 11:1-9). Instead, our goal is to learn what the gift of tongues is.

From Acts 2, we can identify four marks that define a genuine gifting of tongues:

2.     Medium: In human languages they had never learned (2:11—Galileans speaking the dialektos or native language of Parthia or Crete, etc.);

3.     Listener: To people who knew each regional language (dialektos) as the particular language they knew best;

These four marks set the boundaries for a genuine gifting of tongues.

Some might challenge this conclusion, saying, “But, what about the experiences of the Corinthians? What about those who speak with the tongues of angels?”

Please send me your comments and questions by clicking here.

BACK TO Insights into leading, administering, and showing mercy

Photo credit: I am reposting this image used for "Celebrating Pentecost." It is titled "When the day of Pentecost came" by Mark A. Hewitt of Panorama, South Australia (http://oldtractortinshed.net/). Mr. Hewitt's site states, "You are free to use these works for non-commercial purposes" This is a non-commercial use.

Works by Mark A. Hewitt are licensed under a Creative Commons Attribution-NonCommercial-NoDerivs 3.0 Unported License.