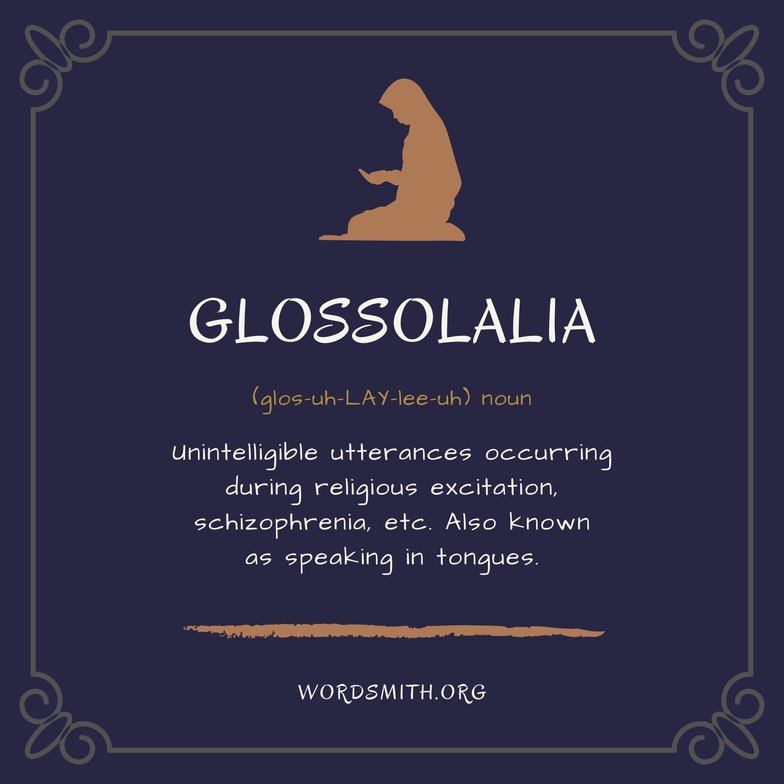 For many, this post enters the realm of controversy.

Glossolalia is the Greek word for ‘speaking in tongues.’ It is the simple combination of glōssa (tongue or language) and laleō (speak).

Is the definition in the accompanying photo accurate? Are genuine glossolalia “unintelligible utterances”? Is it “schizophrenia”?

This description contradicts our findings from the previous post, “4 Marks of a Genuine Gifting of Tongues.” There we learned that the gift of tongues is speaking about the mighty deeds of God in actual human languages; languages not learned by the speakers but understood by the listeners.

The previous post ended with a note that was more of a challenge than a question.

“But, what about the experiences of the Corinthians? What about those who speak with the tongues of angels?”

The tongues or languages of angels are mentioned in 1 Corinthians 13:1. After we take a few moments to consider what Paul says on this subject, we will realize he is teaching us a much more important lesson.

In 1 Corinthians 12, Paul introduces spiritual gifts within the Christian community. Chapter 14 provides instruction on the proper use of these gifts, focusing on tongues and prophecy. Sandwiched between these two chapters, Paul writes about love.

Keep in mind that the Christian community at Corinth was an authentic church God loved. But unfortunately, that church was guilty of numerous abuses and dysfunctions.

It is not surprising that these abuses and dysfunctions impacted the exercise of spiritual gifts. The Corinthians were proud and competitive in their use of gifts, such as speaking in tongues and prophesying.

In many ways, the Corinthian Christian community manifested how not to live as followers of Jesus.

Let’s examine the question: “What does Paul mean when he refers to speaking with the tongues of angels?”

If I speak with the tongues of men and of angels, but do not have love, I have become a noisy gong or a clanging cymbal.

If you also read verses 2 and 3, you will notice that all three verses (13:1-3) have the same structure. Each of these verses opens with a conditional clause: “If …,” which can mean that something is true or not true. Each also refers to love.

Our goal is to understand verse 1 and the matter of “the tongues or languages of angels.” So, we will first deal with the structure of verses 2 and 3, and then we can return to verse 1 with confidence.

If I have the gift of prophecy, and know all mysteries and all knowledge; and if I have all faith, so as to remove mountains, but do not have love, I am nothing.

Paul was not only an apostle but also one counted among “prophets and teachers” (Acts 13:1). Therefore, when Paul writes, “If I have the gift of prophecy,” he states something true about himself. We will call this first part of the structure ‘X.’

The second part (‘Y’) of the verse is, “If … I know all mysteries and all knowledge; and if I have all faith, so as to remove mountains.” Is this true or not true of Paul?

I have underlined the repeated word “all.” Although Paul understood some mysteries (Romans 11:25; 1 Corinthians 15:51), he did not know all mysteries and certainly did not have all knowledge (Romans 11:33-34; 1 Corinthians 13:9)—these are qualities that belong to God alone. Similarly, although Paul was a man of great faith, he did not have “all faith.” So, this second part of verse 2 is not true. Paul is using hyperbole—an unbelievable exaggeration to make a point.

The third part (‘Z’) states that without love, these spiritual gifts (no matter how great) are nothing.

Based on this analysis, verse 2 is meant to be read and understood this way:

X: If I [Paul] have the gift of prophecy—which is true …

Y: and [if I] know all mysteries and all knowledge; and if I have all faith, so as to remove mountains—which is not true, but even if I possessed this impossibly great knowledge and faith, which I don’t, but even if I did…

Z: and do not have love, I am nothing.

Paul uses hyperbole to make the point that no matter how great a person’s gift is if that person is operating without God’s love, it is nothing.

Let’s test this formula in the next verse.

X: And if I give all my possessions to feed the poor,

Y: and if I surrender my body to be burned,

Z: but do not have love, it profits me nothing.

X: Paul was poor, having nothing (2 Corinthians 6:10). He also had suffered the loss of all things for the sake of Christ Jesus (Philippians 3:8), which includes not only his heritage and achievements but also his material possessions. These statements could consist of giving all his possessions for the poor.

Y: Earlier in 1 Corinthians 6:12-20, Paul states that “your body is a temple of the Holy Spirit who is in you, ... you are not your own.” On this basis, it was not Paul’s decision to surrender his body to be burned. Thus, this statement is a gross exaggeration—but even if it were possible …

Z: Even if it were possible for Paul to decide to surrender his body to be burned, if he did not have love, such sacrifice would profit him nothing.

This confirms that our proposed structure is on track. Now, let’s return to verse 1.

As we apply the same pattern to verse 1, this is what we hear:

X: “If I speak with the tongues of men”—which is true because Paul writes, “I speak in tongues more than you all” (1 Corinthians 14:18) …

Y: “and [if I speak with the tongues] of angels,”—which is not true, but even if I could …

Z: If I “do not have love, I have become a noisy gong or a clanging cymbal.”

Again, Paul is not saying that he (or anyone else) can speak in the tongues or languages of angels. Instead, he is using hyperbole to make his point—that even if someone could speak in such an exalted language, if that person did not have love, they would be nothing more than so much unpleasant noise.

Paul’s point in 1 Corinthians 13:1-3 is the absolute necessity of love in exercising our spiritual gifting.

Paul was not contradicting the manifestation of the Spirit at Pentecost, but it seems the Corinthians were.

So, Paul is not saying he (or any other human) can speak in the language of angels. Instead, he is saying—and here is the crucial lesson—we must exercise our gifting with love or that gifting (no matter how great and exalted) is useless.

I encourage you to read about the “16 Qualities of Love,” which examines each of the qualities of agapē-love in 1 Corinthians 13.

In the next post, we will reveal two prevalent distortions of spiritual gifts and how to avoid them.

BACK TO “4 Marks of a Genuine Gifting of Tongues”