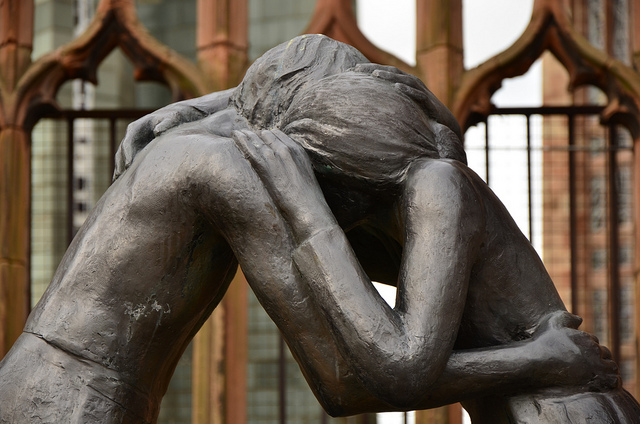 Throughout, a follower of Jesus who stands in the place of the offended person is to maintain a stance of unconditional love toward the offender, even though forgiveness does not yet take place (“The Therapy of Love” and “Love is Active”). We need to distinguish between love and forgiveness.

This series is aimed at reclaiming a biblical understanding and practice of forgiveness. As such we have explored what forgiveness is, and is not. Among other things we have learned that:

Ultimately, the destination of forgiveness is reconciliation – the rebuilding of a relationship that has been damaged or broken.

Forgiveness is conditional. Jesus speaks briefly and profoundly about this to his disciples in Luke 17:1-4:

Jesus said to his disciples: "Things that cause people to sin are bound to come, but woe to that person through whom they come. It would be better for him to be thrown into the sea with a millstone tied around his neck than for him to cause one of these little ones to sin. So watch yourselves. "If your brother sins, rebuke him, and if he repents, forgive him. If he sins against you seven times in a day, and seven times comes back to you and says, 'I repent,' forgive him."

From this we conclude that offences are inevitable, making the process of forgiveness necessary.

Forgiveness is conditional: "if he repents, forgive him." Once an offending person repents, the offended one is to forgive – no more “ifs, ands, or buts.” In fact, Jesus says “forgive him” (underlined above) in the imperative, which means it is a command.

The disciples see this as requiring more than they are able. So, they ask: “Increase our faith!”

“If you have faith as small as a mustard seed, you can say to this mulberry tree, 'Be uprooted and planted in the sea,' and it will obey you.”

The Lord seems to be saying, “It’s not a matter of how much faith you have.” He then continues with a parable about a landowner and his servant (17:7-11):

"Suppose one of you had a servant plowing or looking after the sheep. Would he say to the servant when he comes in from the field, 'Come along now and sit down to eat'? Would he not rather say, 'Prepare my supper, get yourself ready and wait on me while I eat and drink; after that you may eat and drink'? Would he thank the servant because he did what he was told to do? So you also, when you have done everything you were told to do, should say, 'We are unworthy servants; we have only done our duty.' "

You may wonder how this fits with Jesus’ teaching on forgiveness. He's using this ‘story’ to demonstrate his point.

A servant obeys his master. When the servant does his or her duty, there are no special privileges.

What is this saying about the command to forgive a person who has repented?

It is this, do what your Lord commands. Obey him.

Forgiveness in these circumstances is not about how you feel about the offender or the offence. It is not about whether you are still hurting from the offence. If the offender repents – if he or she comes to you and says something like, “I was wrong to have ____________ to you. Will you forgive me?” The follower of Jesus has but one proper response: “I forgive you.”

In earlier posts we examined Hebrew and Greek words translated as “forgive” in the Bible ("Destination of Forgiveness"). As we gathered these words together we got a sense of the dynamics of forgiveness. The wrong, sin, offence, or guilt of the offending person is pardoned, covered, wiped out, sent away, dismissed – and that person is released from the guilt of the offence.

Like the apostles, you may ask, “How do I forgive like that? What does it mean to forgive?”

We adapted a practical definition from Jay Adams in From Forgiven to Forgiving:

Forgiveness is the declared promise to another never to bring up that person’s offence again to use against that person.

It is a promise to, or covenant with, the wrongdoer who repents. When you forgive, you are promising the repentant wrongdoer never to bring up that offence again or to use it against that wrongdoer. You are saying, “You are released from the guilt of your wrongdoing.”

Are there people who have asked for your forgiveness, but you have withheld it in whole or in part?

Now what do you need to do?