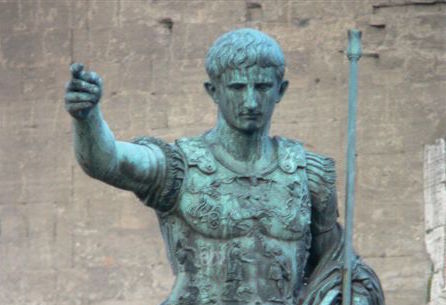 “I read the news and find hope.”

“What? Are you stupid or something?”

“I don’t claim to be a genius, but I’m encouraged by God.”

“You are encouraged – you find hope? What about the threat of ISIS; economic crises in Europe; pollution in Asia; the imminent collapse of the American way of life?”

“These are the things that matter – this is reality. If this falls apart what will we have? You must be living in a dream world!”

“I’m not ignoring the fact that things seem to be falling apart. I’m choosing to focus on the long-term, not the short-term. Yes, these are times of great turmoil, but God is present and active. His purposes will never be frustrated.”

Some questions to ask

As we move from the Old Testament to the New a few things might confuse us. Those were also times of great turmoil.

Great empires and institutions disappeared or changed radically. We have lots of questions like:

Let’s spend a little time tracing some of the major events that happened during the 400 years or so between the Testaments.

From Persian to Greek

About a century after Nehemiah, Alexander the Great led the Greeks in a devastating conquest of Persian territory that only took about ten years (333 – 323 BC).

The year 323 BC marked the death of the 33-year-old Alexander. His death left a leadership vacuum in his new empire. Who would now rule this vast territory?

In simple terms, the Greek empire was divided among four of Alexander’s generals. The two that are relevant to us are Seleucus who ruled the Syrian territory, and Ptolemy who ruled the Egyptian territory. Between these two territories lay the lands that had been Israel and Judah.

This period of Greek, or Hellenistic, dominance had a profound effect upon the cultures of that region. Among other things Koine (or, Common) Greek became the common language of these diverse people groups.

From Greek to Independence

As a result of severe persecution by a kingdom in decline, in 167 BC the Jewish people revolted against the rule of the Seleucids that governed the lands of Judah, Samaria, and Galilee.

Perhaps the action that ignited this upheaval was Antiochus Epiphanes (the Seleucid ruler) sacrificing a sow in the temple at Jerusalem. The revolt was led by a family of Jewish priests call the Maccabees. Their successors were known as the Hasmoneans or “rich ones.”

For a little more than 100 years, the Jewish people had some independence. This ended when the Roman legions marched into the region.

From Independence to Rome

In 63 BC the Roman general, Pompey the Great, claimed the lands of Israel and Judah for Rome. In the same year, Gaius Octavius was born.

Herod the Great was an Idumean meaning that he was a descendant of Esau (not Jacob/Israel). The land of the Idumeans was Edom which is roughly present-day Jordan. Herod was appointed “King of the Jews” to rule the Jewish territory for Rome. We read of him and some of his descendants in the books of Luke and Acts.

Gaius Octavius changed his name to Augustus. He ruled as the first Roman Emperor from 27 BC to 14 AD. It is Augustus of whom we read in Luke 2:1 – “In those days Caesar Augustus issued a decree that a census should be taken of the entire Roman world.”

Four things we can learn from history

What can we take away from this brief history lesson to benefit how we live today?

1.         Remember that we’re tracing history – real events. This is not dream-world stuff, this is reality! The temptation is to see history as some-how unreal because of its distance. Remember this is about real people, kings, and empires.

Looking at the big ‘story’ gives us the real picture – it gives us a true perspective of current events.

The great empire of Persia collapsed under the weight of the Greek invasion. The Greek force faded gradually after the death of Alexander. Jewish independence was crushed by Rome.

Where’s the might of the Roman army now? More recently, where are the Third Reich and the Soviet Union?

If we look more closely at each era we find God at work through his people.

This is true of our ‘here and now’. God continues to be present and active.

4.         Knowing this big picture – God’s ‘story’ – makes a difference to our perspective of world events? How can it influence the way we think and act?

If you get a sense of this larger ‘story’ you begin to see things differently. You become a person of hope despite what the news says. And in this hope, you can discern how God is present and active. And from there you can join him in advancing his ‘story’ – even in small things.

What other action points can you add?