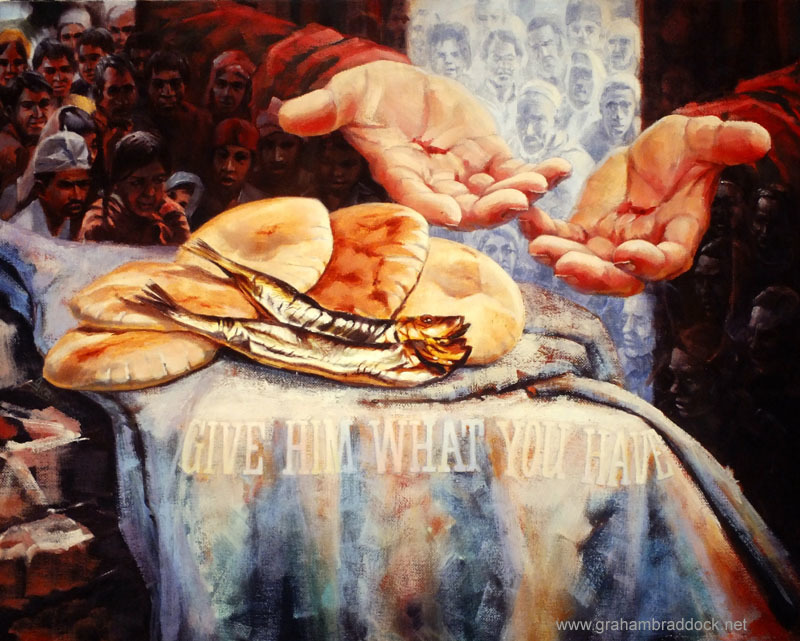 Recently, I read a scathing analysis of the popular Joel Osteen.

In God in the Whirlwind, David Wells comments:

In [Osteen’s] (saccharin-like) view, God is our greatest booster who, sadly, is frustrated that he cannot shower on us more health, wealth, happiness, and self-fulfillment. The reason is simply that we have not stretched out our hands to take these things. God really, really wants us to have them. If we do not have them, well, the fault is ours.

Our text confronts this attitude about Jesus.

What did the crowd think of Jesus?

John writes that “A large crowd followed [Jesus], because they saw the signs which He was performing on those who were sick” (6:2). It seems they were in it for the healing or the show.

We then read “the people saw the sign which He had performed, they said, ‘This is truly the Prophet who is to come into the world.’ So Jesus, perceiving that they were intending to come and take Him by force to make Him king, withdrew again to the mountain by Himself alone” (6:14-15). They liked the idea of free food – it would make life so much easier.

A little later we read what Jesus says to the crowd: “Truly, truly, I say to you, you seek Me, not because you saw signs, but because you ate of the loaves and were filled” (6:26). They were interested in the benefits, not in Jesus.

The crowd seems to be infected with Osteen-like theology.

Take a moment to acquaint yourself with what John writes about this sign (John 6:1-15).

John gives us a few clues that should help us understand what is happening. Here are three:

Earlier today a good friend and I were chatting about this sign. He mentioned the main attempt to debunk this miracle. The boy becomes an example that others follow. Others share their food and there’s enough for everyone. Here’s some ways in which that attempt falls flat:

A reasonable reading of what John wrote leads us to conclude that 5,000 men (plus women and children) were fed “as much as they wanted” (6:11) from five loaves and two fish supplied by a little boy.

What does this tell us about Jesus?

First, keep in mind the reference to the Passover. Add to this the location and nature of the sign: feeding a multitude in the wilderness. Jesus even mentions the manna provided by Yahweh to Israel in the wilderness (John 6:31-33 compare Exodus 16).

Jesus is standing before the people as Yahweh – and they don’t get it.

Second, Jesus presents himself as the true manna. He says “I am the bread of life; he who comes to Me will not hunger, and he who believes in Me will never thirst. But I say to you that you have seen Me, and yet do not believe” (John 6:35-36).

Jesus is standing before the people as the manna – and they don't get it.

Jesus himself – not the things he provides – is bread for the journey!

You may have more to add, but here’s a start:

If we find ourselves focusing on what he provides we need to give ourselves a shake and get our vision back on Him.

2.    Jesus invites us to participate with him in blessing others.

It is as we put our meagre resources into His hands that they are multiplied to meet the needs of others. This involves trust and sacrifice.

Jesus declared: “For this is the will of My Father, that everyone who beholds the Son and believes in Him will have eternal life” (6:40).

What can you add to these observations?

Photo credit: “Loaves and Fishes” by Graham Braddock. Mr. Braddock’s home page (http://192.241.220.6/grahambraddock.co.nz/?p=1) states: “Gallery – Free Art Downloads! … You are welcome to browse and download any of the images for personal, powerpoint, or non-profit use.” This is a non-profit use.