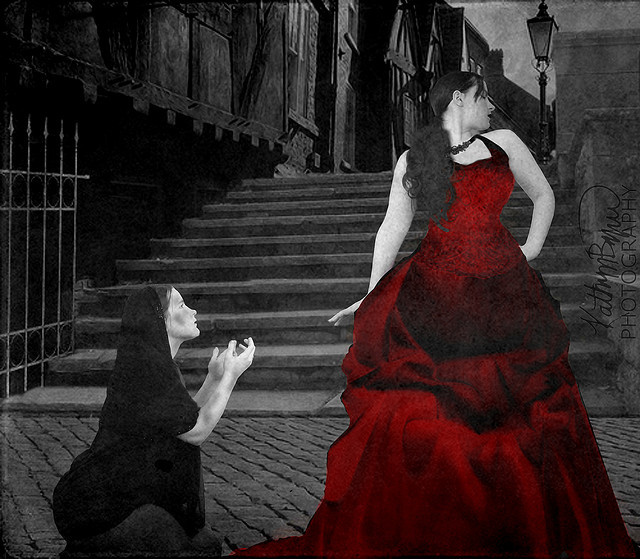 We like to think that prejudice does not exist in our Christian communities – but we may not recognize it when we see it.

My brothers [and sisters], show no partiality as you hold the faith in our Lord Jesus Christ, the Lord of glory. For if a man wearing a gold ring and fine clothing comes into your assembly, and a poor man in shabby clothing also comes in, and if you pay attention to the one who wears the fine clothing and say, “You sit here in a good place,” while you say to the poor man, “You stand over there,” or, “Sit down at my feet,” have you not then made distinctions among yourselves and become judges with evil thoughts?

James raises the difference between how a rich person and a poor person are treated in a Christian community. The rich person appears with a gold ring and fine clothes and is seated in a place of honor and comfort; the poor person in shabby or laborer's clothes is seated on the floor by someone’s footstool. In our context, would we treat a successful looking business person better than, say, a person who lives on the street?

Many, if not most, cultures treat the rich better than the poor – at least those who appear rich over those who appear poor. I put this to the test after reading an article on the relationship between service and clothing. I experienced better service in restaurants and banks when I wore a business suit compared to when I wore less-impressive clothes.

What does James say about this behavior within a community of followers of Jesus? He condemns it with a rhetorical question (2:4 from The Message):

haven’t you segregated God’s children and proved that you are judges who can’t be trusted?

This principle applies not only to favoring rich over poor but also to discriminating among ethnicities (black vs. white; Croat vs. Serb) or ages (old vs. young), even degrees of health, disability, and education.

James gives us three reasons why favoritism of the rich over the poor within the Christian community is destructive.

Listen, my beloved brothers [and sisters], has not God chosen those who are poor in the world to be rich in faith and heirs of the kingdom, which he has promised to those who love him? But you have dishonored the poor man.

James follows the teaching of the Lord Jesus who inverted the world's standard value system of honoring the rich and shaming the poor.

It’s not wrong if a person is wealthy, but honor before God is not based on wealth, finances, and possessions – and it seems that riches often get in the way of pursuing God. Jesus says, “Blessed are you who are poor, for yours is the kingdom of God” (Luke 6:20).

In the gospel accounts, it is most often the poor, diseased, and disenfranchised people that respond to Jesus. Consider the contrast Jesus makes between the love of (rich) Simon and the love of a (poor) unnamed woman in Luke 7:36-50.

The Greek word translated “oppress” (katadunaseuō) may also be rendered as dominate or exploit. It is the nature of empires to oppress, dominate, and exploit. So, the Egyptians (Exodus 1:13 LXX), the Babylonians (Jeremiah 50:33 LXX), the Devil (Acts 10:38), and also these rich people, oppress, dominate, and exploit others. Each of these biblical texts uses this same Greek word for oppressing (katadunaseuō).

For a follower of Jesus to treat a poor person the way the rich treat the poor, is to endorse the practices of empires such as Egypt, Babylon, and the Devil.

3.  The rich “blaspheme the honorable name by which you are called” (James 2:7).

“Blaspheme” is a strong word indicating that the rich demean, denigrate, and malign the name of God who reveals himself as Jesus Christ.

So, if we show favoritism for the rich and against the poor, we are contradicting a loving God, siding with ruthless empires, and endorsing vile blasphemies.

What is the remedy for this unwarranted favoritism within Christian communities?

If you really fulfill the royal law according to the Scripture, “You shall love your neighbor as yourself,” you are doing well. But if you show partiality, you are committing sin and are convicted by the law as transgressors.

Partiality or favoritism breaches the second great commandment: “You shall love your neighbor as yourself” (Matthew 22:35-40; Leviticus 19:18).

How we treat others is the measure of how we treat God. Jesus refers to this principle when he says that our treatment of the hungry, the thirsty, the stranger, the naked, the sick, and the prisoner is our treatment of Jesus himself (Matthew 25:31-46).

James gives us at least two motivations for you to love your neighbors, whoever they may be.

Future or eschatological judgment of each of us will happen. How does this influence your present treatment of others?

“So speak and so act as those who are to be judged under the law of liberty” (James 2:12).

James writes about our judgment of others:

“[F]or judgment that is without mercy to one who has shown no mercy. Mercy triumphs over judgment” (2:13).

I hope that I am not reading too much into this text. Whether in the present or in the future, you will get a taste of your own treatment of others.

We are to act in mercy. What is mercy?

Mercy is contrasted with judgment – so you are not to be judging in favoritism against the poor.

In a positive way, mercy is “kindness or concern expressed for someone in need.” (BDAG Greek-English Dictionary)

I’m going to go out on a limb – but a really thick, strong limb. This mercy is treating others the way Jesus would treat them.

So the antidote for the dysfunction of favoritism within community – favoring the rich, and disdaining the poor – simply involves drawing upon the grace of our Lord Jesus Christ and treating others the way he treats them.

Easier said than done – but necessary if we are to be living toward wholeness.