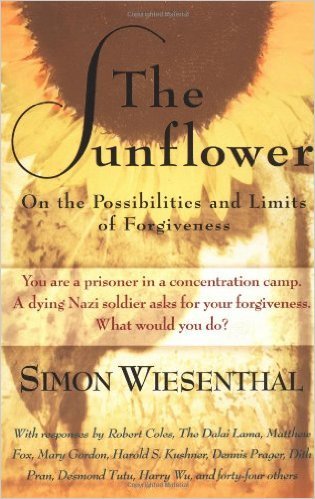 Simon Wiesenthal (1908-2005) was a Holocaust survivor and Nazi hunter.

In his book, The Sunflower: on the possibilities and limits of forgiveness, he recounts a dilemma about forgiveness.

This dilemma is the same as one raised by a few of you during this series: “What do I do if the person I have harmed can’t be located, or is dead?”

Here are two practical responses to this dilemma.

Wiesenthal writes of an incident as a Jewish inmate in a concentration camp during World War Two.

While on a work detail, he was led into a hospital ward where a German SS soldier was dying. The soldier, Karl, was haunted by his murder of a Jewish family. He wanted to confess this atrocity to a Jewish person – any Jewish person.

Even though Wiesenthal was convinced of the genuineness of the young soldier’s repentance, he was silent. He concluded that it was not for him to respond to the confession – he had not been the one harmed by the soldier.

What should Wiesenthal have done? What would you have said?

This is the dilemma.

A narrative we have followed closely in this series is that of David in 2 Samuel 11-12.

Among other things, king David engineered the death of Uriah, a loyal and honorable officer in his army. Like the German soldier, David’s victim was no longer alive to hear his confession – his spoken repentance.

David’s prayer of repentance in Psalm 51 provides us with the answer to Wiesenthal’s dilemma.

In his confession to God, we hear these words: “Against you [God], you only, have I sinned and done what is evil in your sight” (51:4).

As we have discovered in this series, sin against an ‘image of God’ is sin against the God of the image. Whether the harm or offence done against other humans is murder (as with David and the German soldier), or speaking badly of a friend, all are sins against God.

Here's what we learn from David's response.

When you become aware that you have sinned against, offended, or injured another person, you need to confess (speak out your repentance) before the one true God – the God of the image.

One practice that I have built into my life is to speak out to my God and Father the words of 1 John 1:9 in a way that expresses my change of heart unconditionally, completely, and contritely.

When the text of 1 John 1:9 is personalized, it may sound something like this:

“Father, I confess my sin of [specifics]. I thank You that You are faithful and just to forgive this my sin, and to cleanse me from all unrighteousness. I ask for your grace and power never to do this again.”

This is a simple guide to a burdened heart as it confesses “in the vertical” – that is, toward God.

First, you should follow the example of David, whether the person is dead or alive. Speak your repentance to God first.

Second, provided the person is alive, seek out the other person to confess your wrong and ask for forgiveness from that person.

What if you've tried everything to find the other person. What then?

Here’s what a reader contributed.

A person had injured a relationship by speaking badly about her friend.

Over the years, recollections of the rift she caused often troubled the woman. But she no longer knew where she could find the other person.

During a Sunday morning worship service, she determined in prayer to make every effort to rebuild the broken relationship. She asked the Lord to make the reconciliation possible.

Following the prayer time, and at the urging of the pastor to extend greetings to those still standing, she turned to recognize the very lady she needed to meet! Needless to add that following the conclusion of that good service, the two women leaned into a relationship only the Holy Spirit could have created!

Do what you can to locate the other person. If this doesn’t seem possible, pray. As we’ve seen, God does many amazing things.

But, what if the offended person refuses to forgive you?

This introduces yet another question raised by a reader.

Photo credit: Cover of The Sunflower by Simon Wiesenthal obtained from Amazon.com.