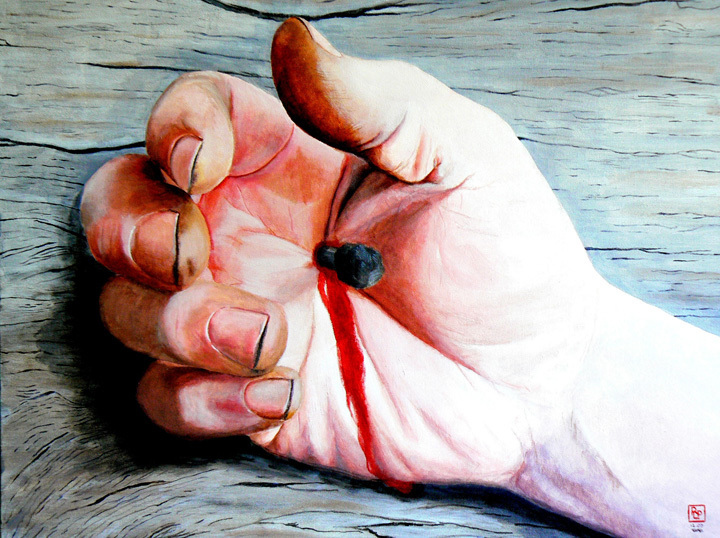 Today is Good Friday, the traditional date when we commemorate the crucifixion of Jesus Christ. Given that, what is good about Good Friday?

Johnny Hart graphically captures the answer to that question with these images:

Before I share a poem about a follower of Jesus traveling through a dark valley of despair and into a light-filled life of hope, I invite you to read the account of the trial, crucifixion, and resurrection of the Lord Jesus in at least one of the Gospel accounts. Here are the references and links: Matthew 27-28; Mark 15-16; Luke 23-24; and John 19-20.

A Roman nail lies on my desk. It is a nail much like those used to crucify the Lord Jesus.

The nail is accurately dated no later than 86 A.D. It is from Scotland, where a Roman fortress used to stand.

The fortress, called Inchtuthill (Inch-too-till), was constructed about 82 A.D. However, it was soon dismantled in 86 A.D. when the occupying force, the Legio XX Valeria Victrix, withdrew. You can learn more about this site by clicking here.

In the 1950s, Sir Ian Richmond excavated the site of the fortress.

A large pit was found containing more than 750,000 iron nails and other iron objects weighing a total of ten tonnes. The pit was elaborately concealed, and the troops almost certainly buried the nails and ironwork to deny them to the local tribes when the Romans left. It is one of those nails that lies on my desk.

As I handled that 1st Century nail and felt its rough hardness, I wondered what happened to the nails used to crucify our Lord.

Each nail was a small piece of iron shaped and used by the Empire of Rome.

From these musings, I wrote a poem. It begins with a follower of Jesus in despair and ends on a note of hope.

Pierced through with pain of spirit—if not flesh

The mindless forge then forces flame

To melt and draw the iron.

Compelled to take its shape by cruel design.

The Empire’s point pierces through His willing flesh.

Bruised and bleeding in darkness He dies.

Empire’s aspirations arrive at the threshold of eternity.

Torn from His lifeless body,

The King of Heaven then laid to rest,

A trophy in Empire’s dark cave.

Remorseless to the end,

It seals his sole escape.

Then, against Empire's plan and power,

Deep within the darkened cave

bursts forth a beam of light.

From the silence of the tomb

erupts a shout of victory.

While there unseen upon the ground

creeps back into the earth.

Something warm within the saint’s darkness stirs –

Expressing light upon His throne

My King invites me to reach out—of pain—

caress the print upon His palm—

“Remember how he told you … ‘The Son of Man must be delivered into the hands of sinful men, be crucified and on the third day be raised again’” (Luke 24:6-7). Photo Credits: “Hand of an extraordinary man” by J. Rafael Pintos-Lopez (2007) from his website at http://rafaelpintoslopez.com/eng/.

The Roman nail is by Paul Garland via Compfight cc.