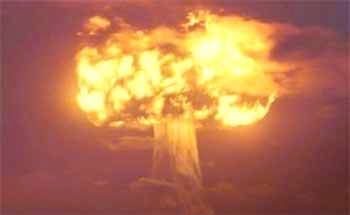 What do you think of the book of Revelation?

Perhaps you’ve concluded it is:

Although the film industry seems to link the Revelation with sensational apocalyptic plots involving religious ‘nut jobs,’ that’s no reason to write it off. After all, Hollywood usually gets it wrong when it comes to Jesus.

I argue that Revelation is neither irrelevant nor incomprehensible – although it can be difficult.

In the Historical Backbone of the Bible, we are reading to learn the basics of God’s ‘Story.’ That ‘Story’ would not be complete without the Revelation.

The Revelation opens with these words (1:1-3 NIV):

The revelation of Jesus Christ, which God gave him to show his servants what must soon take place. He made it known by sending his angel to his servant John, who testifies to everything he saw – that is, the word of God and the testimony of Jesus Christ. Blessed is the one who reads the words of this prophecy, and blessed are those who hear it and take to heart what is written in it, because the time is near.

I propose seven (7) signposts to guide us through Revelation:

1.         It is the “revelation of Jesus Christ.” As you read, keep Jesus Christ in view at all times. It is his revelation or, in Greek, apokalupsis meaning his “uncovering.”

2.         It is entrusted to John, the apostle. This is the same person who wrote the Gospel, according to John. At this point, he had known and followed Jesus for the better part of 70 years. We can trust what he writes.

3.         It is about God and Jesus Christ. What John testifies to is “everything he saw – that is, the word of God and the testimony of Jesus Christ.” As you read, focus upon what God is doing and the place that Jesus Christ has in that.

4.         You will be blessed by reading the Revelation and taking it to heart. Here’s what it says: “blessed are those who hear it and take to heart what is written in it” (1:3). Even if you don’t understand all of what you read, read with the expectation of being blessed.

For instance, stand with John as he turns around to see the voice that was speaking to him (1:12-18). Language seems to fail John as he attempts to describe the Lord Jesus. He has to use similes such as his hair is white like wool; his eyes are like blazing fire; his feet are like bronze glowing in a furnace.

As you read through the Revelation, notice how Jesus Christ is described, and take it as an opportunity to reflect and worship.

Jesus commands John: “Write, therefore, what you have seen, what is now and what will take place later” (1:19).

The messages to the seven churches in chapters 2-3 are included in “what is now.” A substantial part of what follows is, to John, “what will take place later.”

John most probably wrote the Revelation during the last years of the reign of Emperor Domitian (81-96 AD). Even before Domitian, Roman emperors required worship of themselves as a divine person. The refusal of Christians to participate in this emperor-worship often resulted in severe persecution.

One theme of Revelation is the inevitable collision between ‘Empire’ and the Kingdom of God. ‘Empire’ is exemplified by references to Babylon but includes all with imperial pretentions against the reign of God, including Rome, and, more recently, other manifestations such as Nazi Germany, Communist Russia, and even Capitalist America.

The ‘collision’ appears to give the empires the initial victory. In this context, the people of God are warned not to worship the beast and his image – despite the persecution that results (14:9-10; 18:4).

The message of Revelation is that God, not ‘Empire,’ is in control of history. God will ultimately triumph, and his people will be vindicated (e.g., 12:10-12).

7.         Revelation is permeated with the Old Testament. Although there are few quotations, there are over 400 allusions from the OT woven into this book. Among many others, you will recognize images and themes from Genesis 1-3; the plagues from Exodus; imagery and visions from Isaiah, Ezekiel, and Daniel (although you may not have read those prophetic books yet).

How many others can you identify? What are their significance?[1]

As you read the Revelation, expect to be blessed, and to have your vision of Jesus Christ expanded!

[1] These correspondences are called “inclusios.” They act like bookends or the frame of a picture. As such, they confirm the text of the Bible from Genesis to Revelation as one complete unit.