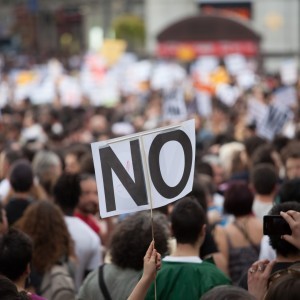 Why do some people choose not to believe in Jesus Christ?

In the previous post, we considered the immediate aftermath of the miraculous sign in which Jesus raised Lazarus from the dead. No one—not even opponents—questioned the reality of that resurrection.

In part 1, we identified two barriers to believing in Jesus:

#1. A death grip on status and power

Next, consider the response of the Pharisees—that Jewish sect that meticulously interpreted and applied the law given to Moses.

Now the crowd that was with [Jesus] when he called Lazarus from the tomb and raised him from the dead continued to spread the word. Many people, because they had heard that he had given this miraculous sign, went out to meet him. So the Pharisees said to one another, “see, this is getting us nowhere. Look how the whole world has gone after him!” (12:17-19)

At one point, Jesus warned his disciples:

“be on your guard against the yeast of the Pharisees, which is hypocrisy.” (Luke 12:1)

In modern usage, a hypocrite is typically a person who says one thing and does another. However, in the context of the Gospels, hypocrites are described by Jesus in these terms (Matthew 23:27-28):

These people honor me with their lips, but their hearts are far from me.

The doubleness or hypocrisy is between the outward actions and the inner person or heart.

Again, how many people are committed to their “way of living,” no matter how hypocritical it might be? To them, the façade they present outwardly is more valuable than the radical transformation of the heart that takes place by believing in Jesus Christ.

Even after Jesus had done all these miraculous signs in their presence, they still would not believe in him.

Jesus follows this encounter with two quotations from the prophet Isaiah. The first (Isaiah 53:1 in John 12:38) declares this group’s response as a fulfillment of a perennial issue. Throughout the history of Israel, people have repeatedly chosen to reject God’s message and God’s revealed power.

He [God] has blinded their eyes

And deadened their hearts,

So they can neither see with their eyes,

Nor understand with their hearts,

Nor turn—and I would heal them.

This is not predestination to judgment as some wrongly believe. Edward Klink, in his commentary on John’s Gospel (559), rightly states:

For nowhere in the Gospel (or Scripture, for that matter) are the will of God and human freedom pitted against one another or made to be a problem.

Like the nation of Israel in the days of Israel, this group in the time of Jesus consistently rejected the message and revealed power of God. Their wilful, sustained refusal to recognize the glory of God (12:41) and to respond to God’s call to repentance and faith had become an entrenched state of their souls. At some point, God mercifully appears to say, “Enough!”

By continually rejecting God’s mercy, people’s hearts can become so calloused that they can no longer believe in Jesus Christ.

There is another barrier to believing that we observed in 12:42-43:

Yet at the same time many even among the leaders believed in him. But because of the Pharisees they would not confess their faith for fear they would be put out of the synagogue; for they loved praise from men more than praise from God.

These leaders believed in Jesus Christ but did not confess their faith. Some would say they were “secret believers.” The statement that they loved the praise of men more than the praise of God brings the reality of their faith into question.

This barrier comes close to my heart in that I (perhaps even now) fail to confess my faith in Jesus Christ because I might fear the ramifications of speaking out more publicly. Maybe I value the praise of humans too much and the praise of God too little.

These two posts have considered five barriers to believing in Jesus Christ.

Can you identify others? What can you add?

BACK TO 5 Barriers to Believing in Jesus – Part 1

Image credit: Unknown. Let me know if you know.