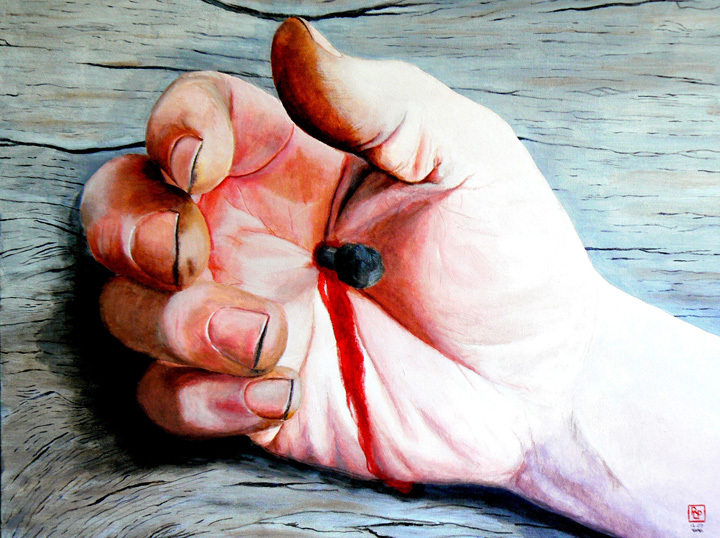 Does God ever change his mind?

To explore and answer this question, let’s take a fresh look at an ancient incident.

The Israelites are in the wilderness waiting for Moses who has been with God “on the mountain forty days and forty nights” (Exodus 24:15-18). They make a golden calf claiming it as the ‘god’ that delivered them from Egypt.

This is idolatry – an act that displaces God in their lives, diminishes their own humanity, and distorts creation.

“I have seen this people, and behold, it is a stiff-necked people. Now therefore let me alone, that my wrath may burn hot against them and I may consume them, in order that I may make a great nation of you”

Most of us would retreat in fear, but not Moses.

Douglas Stuart, in his commentary of Exodus writes that

God “was challenging Moses rather than commanding him.  … it was a rhetorical way of saying to Moses: ‘Here is what I will do unless you intervene.’”

But Moses implored the LORD his God and said, “O LORD, why does your wrath burn hot against your people, whom you have brought out of the land of Egypt with great power and with a mighty hand?  Why should the Egyptians say, ‘With evil intent did he bring them out, to kill them in the mountains and to consume them from the face of the earth’? Turn from your burning anger and relent from this disaster against your people. Remember Abraham, Isaac, and Israel, your servants, to whom you swore by your own self, and said to them, ‘I will multiply your offspring as the stars of heaven, and all this land that I have promised I will give to your offspring, and they shall inherit it forever.’”

1.     An attitude of reverence. Here's an insight I’ve found helpful in a partial understanding of reverence: it is “a wholesome dread of displeasing the One we love.”

This attitude permeates Moses' engagement with the Lord.

2.     Moses “implored the LORD his God.” The meaning of the Hebrew word translated ‘implored’ is also captured by entreated, sought the favor of, and besought. It reflects an attitude of reverence and humility.

3.     In the form of questions, Moses wonders how God is honored in the threatened destruction of the very people he delivered from slavery in Egypt.

4.     He next recalls the historical promises the LORD made concerning Abraham’s descendants, Israel.

5.     Moses then pleads with the LORD to “turn from your burning anger and relent [nacham – change your mind] from this disaster.”

If I was reading this for the first time, I would be surprised, even shocked, by God's response (32:14):

“And the LORD relented [nacham – changed his mind] from the disaster that he had spoken of bringing on his people” .

What we can learn

Mulling over this incident, I feel I’m walking in unfamiliar territory. It is both disquieting and expanding.

Here are four things we can learn from this (you may have more):

Clement of Alexandria describes prayer as “keeping company with God.” It is not a passive, ineffectual discipline – it is a dynamic engagement with the living God.

As Moses was keeping company with God, God changes his mind. Regarding this, Douglas Stuart states:

The idea that God would not shift direction or adjust his plans in respect to prayer is foreign to the Bible but unfortunately at home with some forms of deterministic theology.

In the previous post, we encounter an excuse-laden Moses resisting God’s call to lead Israel.

Now we see a man who is fully invested in God’s purposes for Israel. He demonstrates this not only by his intercession for Israel, but also by his willingness to give his life for Israel’s (32:31-32).

Keeping company with God has a transforming effect upon one's character.

By this I mean, God wants us to be open, honest, even bold as we keep company with Him. This extends the first point.

this text reveals God as “one who is open to change. God will move from decisions made, from courses charted, in view of the ongoing interaction with those affected. God treats the relationship with the people with an integrity that is responsive to what they do and say.”

Perhaps this statement is more acceptable if we (a) maintain an attitude of reverence, and (b) acknowledge that the ultimate purposes of God will never be frustrated.

This incident poses a conundrum for me:

How can the Lord’s honor and glory be maintained as He changes his mind about judging Israel’s inexcusable idolatry?

Some may think this change of mind makes God smaller and weaker. The opposite is the case.

Our God is ready, willing, and able to deal with any array of possibilities and still bring about his ultimate purposes. This is one indicator of his immeasurable greatness.

Our God was even ready, willing, and able to become a full member of the human race – and his name is Jesus. Even when it meant dying the most shameful death of all – he was advancing his ultimate purposes, his utter vindication, and his incomparable glory.

Our God is great, and greatly to be praised!

Photo credit: “Hand of an extraordinary man” by J. Rafael Pintos-Lopez (2007) from his website at http://rafaelpintoslopez.com/eng/ .