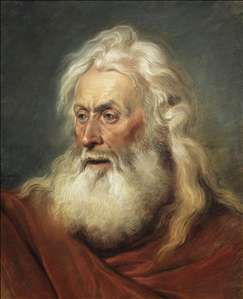 What am I thinking at this very moment?

That’s a question I often ask my audience when I speak on this topic.

Only once did someone make a bold suggestion – and it was wrong. We just don’t know what another person is really thinking until they decide to let us know in some way.

Our thoughts are invisible and unknown to others. They can be made visible and knowable to others when we wrap them in words. The action of listeners and readers unwrapping our words fulfills our action of self-disclosure.

It's a simple thought, but I'm suggesting that Jesus being the Word has something to do with the unknown and invisible God becoming visible and knowable to us.

As we approach John’s gospel we encounter its opening statements (John 1:1-18). Take a moment to read them.

This is usually called the Prologue. More than one biblical scholar writes that this Prologue is the key to John’s Gospel.[1]

In the previous blog we asked two questions: “Who is Jesus?” and “What difference does it make?” The Prologue introduces us to some profound answers to both these questions.

One other thing – this account of the good news of Jesus Christ was written by John, a son of Zebedee. He was an eye-witness and intimate follower of Jesus for at least 60 years. What better source to listen to as we ask our crucial questions?

The Prologue provides us with at least five intriguing answers.

First, “in the beginning was the Word” – the logos. John has chosen words that echo the opening statement of the Creation narrative: “In the beginning God created …” (Genesis 1:1). The logos already was in that beginning – therefore, the logos was not created.

In the beginning was the Word, and

the Word was with God, and

the Word was God.

He was with God in the beginning.

Through him all things were made; without him nothing was made that has been made.

Through the logos all things were made. This is confirmed by the negative: “without him nothing was made that has been made.”

The Word (logos) is fully engaged in the Creation not only with God (the Father), but as God (the Son)!

In him life resides. As such he is the source of all life.

We will come back to this when we consider the question “What difference does it make?”

Third, the acts of Creation were responses to God’s spoken word.

The first creative act mentioned is “And God said, ‘Let there be light,’ and there was light.”

Light bursts forth in the midst of darkness at the spoken word of God.

At least ten (10) times in Genesis 1 we read of creation expanding with the phrase “And God said.”

The acts of Creation were responses to God’s Word – the logos.

Fourth, in the logos we see the glory of God.

In language reminiscent of the tabernacle in the Wilderness during the Exodus (Exodus 40:34-38) we read: “The Word became flesh and made his dwelling [he tabernacled] among us. We have seen his glory, the glory of the One and Only, who came from the Father, full of grace and truth” (1:14).

‘Glory’ is one of those words we often use without really knowing what it means.

Glory is the outward manifestation of inherent worth. For instance, on one occasion [Jesus] was transfigured before [Peter, John, and James]; and His face shone like the sun, and His garments became as white as light” (Matthew 17:2).

Peter later recounts this incident: “[Jesus] received honor and glory from God the Father, such an utterance as this was made to Him by the Majestic Glory, ‘This is My beloved Son with whom I am well-pleased’” (2 Peter 1:17).

Fifth, the logos is finally identified as Jesus Christ who is full of grace and truth (1:14, 17).

In Jesus Christ, the Word, the logos, there is nothing inconsistent with grace and truth.

In answer to the question “Who is Jesus?” we are given these answers:

God became a human and His name is Jesus.

Although there are more reasons, I'll limit them to two:

First, Jesus is no mere regional deity; no god of a particular people group.

Jesus Christ is the ultimate self-disclosure of the One True God who is Creator of all.

The word “god” can mean almost anything in our culture. It is one of those plastic words that is used to describe anything – and nothing.

Eugene Peterson says it well when he writes about the vagueness and meaninglessness of our "god" language: the name and person of Jesus “gathers all the diffused vagueness into a tight, clear, light-filled focus.”[2]

To oppose Jesus Christ is to oppose the One True God, Creator and Lord of everything, and everyone.

Second, the invisible, unknown God has made himself visible and knowable.

His ultimate act of self-disclosure is this: He “became flesh and blood, and moved into the neighborhood” (The Message). In other words, He wrapped himself in humanity and lived among us. He became see-able, hear-able, touch-able, know-able. He lived among us as Jesus Christ.

John writes that “He was in the world, and though the world was made through him, the world did not recognize him. He came to that which was his own, but his own did not receive him. Yet all who received him, to those who believed in his name, he gave the right to become children of God” (1:10-12).

To receive Jesus Christ is to receive the One True God and to become a "child of God" – receiving the extravagant gift of the life of God, and relationship with God, in all its fullness.

And so we hear the response of an intimate follower of Jesus Christ to the question “Who is Jesus?” He declares, “God became a human and lived among us, and his name is Jesus!”