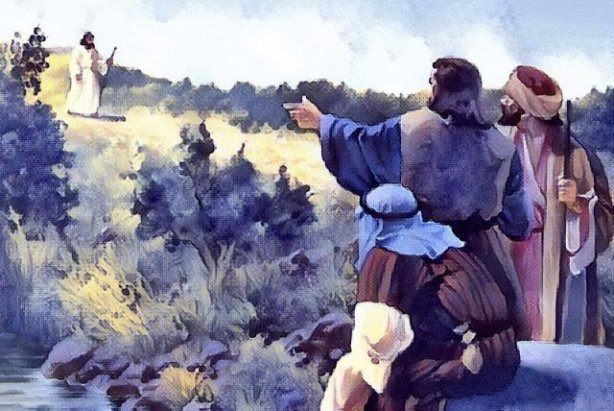 And what if you are given certain expectations about a person or a group of people before your introduction? Will your first impression fall short of the expectations or exceed them?

I invite you to read John 1:19-51 with me to understand better how John begins his narrative, the most incredible story ever. This section covers four consecutive days during which we observe John the Baptist and his interrogators, and Jesus and his earliest followers.

We begin with the witness of John the Baptist, who was introduced to us in the prologue (1:6, 15).

John must have been causing a stir in Jerusalem. His activities were challenging the status quo.  “Priests and Levites from Jerusalem”—officials of a lower rank in the Temple hierarchy—were sent to find out who John was.

John answers their questions with increasing brevity: he is neither the Christ, the anticipated Elijah-like figure (Malachi 4:5-6), nor the Prophet foretold by Moses (Deuteronomy 18:15-19). Instead, he quotes the prophet Isaiah (Isaiah 40:3), saying,

I am a voice of one crying in the wilderness, “Make straight the way of the LORD.”

New Testament writers used Old Testament quotations with reverent care, mindful of the context and meaning. It is noteworthy that “LORD,” with all four letters capitalized, translates the tetragrammaton (literally, the four letters: YHWH)—the name of God revealed in Exodus 3:14-15. This is often transliterated as ‘Yahweh.’

John identifies himself as the voice or herald announcing the approach of the King, Yahweh Himself.

Pharisees (another Jewish religious group) within the official delegation further challenge John about his practice of baptism.

… among you stands one you do not know. He is the one who comes after me, the thongs of whose sandals I am not worthy to untie.

If you and I were listening in the crowd, wouldn’t we want to know who this person was? I find it astounding that the religious officials showed no curiosity about the person John was announcing.

Some people are so secure and comfortable with their limiting beliefs that they do not want to be disturbed by inconvenient truths that might shake their ‘world’ to its very foundations.

The next day, by way of a public announcement, John points out Jesus with these words:

Look, the Lamb of God, who takes away the sin of the world! This is the one I meant when I said, “A man who comes after me has surpassed me because he was before me.”

What does it mean for Jesus to be “the Lamb of God?”

Often, lambs were used as sacrifices—an innocent life is given in place of a guilty or sinful person. Here are two examples.

At the Passover, a lamb was slain, and its blood was put around the doorframe of the house as evidence of the death (Exodus 12). In Isaiah 53, 700 years before the birth of Jesus, the prophet describes a person who gives his life as a guilt offering (Isaiah 53:7):

He was oppressed and afflicted, yet he did not open his mouth; he was led like a lamb to the slaughter …

These and other lambs foreshadow Jesus Christ—“the Lamb of God who takes away the sin of the world.”

How did John identify Jesus as the Lamb of God?

The man on whom you see the Spirit come down and remain is he who will baptize with the Spirit.

As soon as Jesus was baptized, he went up out of the water. At that moment heaven was opened, and he saw the Spirit of God descending like a dove and lighting on him. And a voice from heaven said, “This is my Son, whom I love; with him I am well pleased.”

Not only is Jesus “the Lamb of God,” he is also “the Son of God.” What does that mean?

On the following day, John saw Jesus passing by, and he said, “Look, the Lamb of God!”

Two of John’s disciples heard him and followed Jesus. What motivated them? Was it John and his testimony or something else?

As they followed, Jesus turned around and asked, “What do you want?”

How would you have answered?

The two disciples expressed their desire to be with Jesus: “Where are you staying?”

Jesus’ profound yet straightforward response is: “Come and see.”

What did these men see and hear during their time with Jesus? Whatever it was, Andrew was convinced that Jesus was the Messiah, which is Hebrew for the ‘anointed one’—in Greek, the word is Christ.

Andrew then found his brother, Simon, who Jesus named Cephas (Aramaic for a rock), which in Greek is Peter. The other disciple is unnamed and is usually identified as the author of this Gospel—the beloved disciple.

In turn, Philip finds Nathanael—a man who is both skeptical and honest.

When Nathanael hears that Jesus is from Nazareth, he is somewhat cynical: “Nazareth! Can anything good come from there?”

When Nathanael approaches Jesus, Jesus comments about Nathanael’s character, “Here is a true Israelite, in whom there is nothing false.”

“How do you know me?” Nathanael asks.

To which Jesus answers, “I saw you while you were under the fig tree before Philip called you.”

I have no idea why these statements are significant to Nathanael—but they strike Nathanael at his core. Jesus knows everything there is to know about Nathanael, and Nathanael is amazed.

Somehow, these few words from Jesus reveal something to Nathanael that shifts him from skeptic to believer. It appears that there is nothing wrong with being skeptical if you are honest.

We have just watched and listened to some first impressions. Snippets over four days between John the Baptist and a religious delegation with an agenda; John pointing out Jesus; disciples being introduced to Jesus and following him.

Some lacked curiosity—they weren’t interested. Instead, their goal was to identify threats to the status quo of their limiting beliefs and comfortable positions.

Others were impressed and eager to know more:

Those who lacked curiosity missed the opportunity of a lifetime. None of those who followed Jesus were disappointed.

Now it’s time for you to learn more about Jesus. So join me next week for the first sign of Jesus.

BACK TO Prologue for the Gospel of John