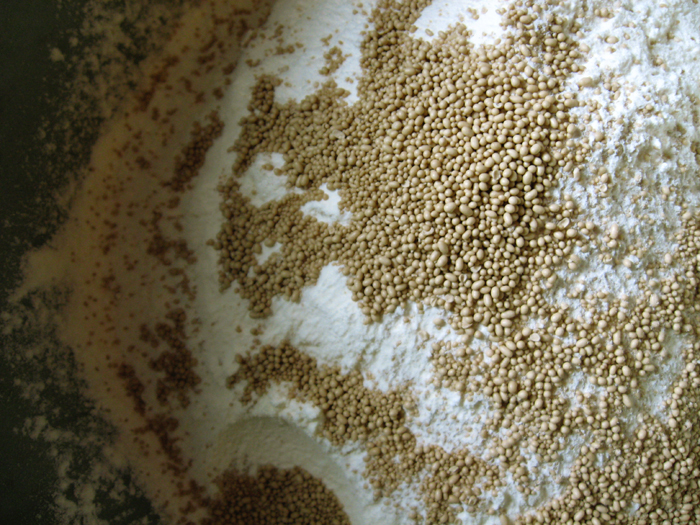 One of my favorites is a thick slice of freshly baked bread slathered with butter and coated with strawberry jam. It just wouldn't be the same on bread made without yeast.

So what's to celebrate in the festival of unleavened bread?

If you have been following the past few blogs, you will understand that there is a trajectory

Although we will not be exploring all of these points, you will have noted that the festival began with the Passover and lasted for seven days. The festival also involved daily sacrifices (Numbers 28:16-25) that were "an aroma pleasing to the LORD." No one in the community of Israel was to eat yeast; in fact, it wasn't even to be allowed in their homes. If they did eat yeast, it was serious – they were to be "cut off from the community of Israel" (Exodus 12:15,19).

To us, cutting a person off from the community for eating a piece of bread with a bit of yeast in it seems to be 'over the top.' What's the big deal?

First, what is the importance of yeast? Naturally, it's a fungus that ferments carbohydrates. In bread dough, it expands and results in the fluffy loaves with which we are familiar.

As a metaphor or "shadow" (Colossians 2:16-17), it is a tiny thing that infiltrates and grows. Usually, leaven or yeast is understood to symbolize something negative.[1] For instance, Jesus warned his disciples to "be on your guard against the yeast of the Pharisees and Sadducees" by which he meant their teaching that resulted in hypocritical and faith-denying lives (Matthew 16:5-12).

Second, the action of eliminating leaven from a person's diet and home was an expression of that person's faith. We have already seen in the Passover how the act of painting blood on doorframes was a sign of faith. So eating non-yeasted bread was also a sign of faith marking that person as a true member of the covenant community of Israel.

In this context, Douglas Stuart writes that "not to be faithful is not to belong to God's people even if living among them ... and therefore not to enjoy their covenant blessings in the long run."[2]

In 2 Chronicles 30, King Hezekiah was calling an unfaithful nation of Israel back to God. Idolatry had infiltrated the nation's life. It had led them away from God.

After many years of neglect, the people gathered to celebrate the Festival of Unleavened Bread. It was at that time they had a national "house-cleaning" of their idolatry: "they removed the altars [of idols] in Jerusalem and cleared away the incense altars and threw them into the Kidron Valley" (2 Chronicles 30:13-14).

I think we're beginning to get a glimmer that this festival was about "cleaning house" getting rid of things that infiltrate and grow to compete for our hearts.

Let's move on to see how this festival was fulfilled in Jesus.

As with the other festivals, the apostle Paul declares fulfillment in Jesus Christ.

In 1 Corinthians 5, Paul is speaking to a situation that was allowed to exist in the church community. A man was living immorally with his father's wife.

We can only speculate about how this had developed. Nevertheless, it had infiltrated and grown in the life of their community – a Jesus community. There is some suggestion that the Corinthian Christians were somewhat proud of their toleration (even acceptance) of sexual immorality – perhaps they thought it was a mark of mature Christian grace to embrace this couple's sinful lifestyle.

Your boasting is not good. Don't you know that a little yeast works through the whole batch of dough? Get rid of the old yeast that you may be a new batch without yeast – as you really are. For Christ, our Passover lamb, has been sacrificed. Therefore let us keep the Festival, not with the old yeast, the yeast of malice and wickedness, but with bread without yeast, the bread of sincerity and truth.

Yeast is used as a negative metaphor. Malice and wickedness had been allowed to infiltrate and swell in the Jesus community. The remedy was to acknowledge the sacrifice of Jesus Christ that had destroyed the power of sin – including this sin – and to live lives that are faithful to the new covenant of Jesus Christ. That involved a "house cleaning" that purged out the yeast of "malice and wickedness" and replaced it with "sincerity and truth."

What does that mean for us today?

First, as we learned in a previous blog, a one-day festival was fulfilled in a historical event by Jesus Christ (e.g., the Passover in the crucifixion of Jesus). A seven-day festival is expressed in a way of living – seven days a week.

This is a seven-day festival. It expresses something of how followers of Jesus live their lives seven days a week.

Second, we are to have a house-cleaning of any yeast or leaven in our lives.

What are the little things that infiltrate our lives and grow to compete for our hearts?

Listen to Colossians 3:5-14 and its language of intentionally "taking off" and "clothing" oneself – stripping off the corrupt practices, and putting on God-honoring practices.

Where's your heart in all of this?

Pornography is reaching epidemic proportions in the lives of men and, to a lesser extent, women. Followers of Jesus are not immune.

As pornography is allowed to infiltrate our lives, it grows. It alters the way we view people – viewing and then treating them as objects for personal gratification rather than as humans who are "image of God." It has a devastating negative impact on, among other things, our minds, hearts, families, time, and bodies. Consider viewing "9 things you should know about pornography and the brain."

1.         Admitting to yourself before God that engaging in pornography is a sinful practice. This honesty calls for a change of heart.

3.         "Stripping off" the practice and replacing it with God-honoring practices. This includes:

If this is an issue in your life, here is one helpful resource: How to Deal with Sexual Addiction.

Ask, "Are there sinful beliefs, attitudes, and practices ('yeast') in my life?"

As the Lord places his hand on an area, issue, or practice in your life, submit to Him and take action. Confess it (1 John 1:9), remove it, replace it, and become accountable for it to another.

BACK TO Firstfruits    FORWARD TO Pentecost