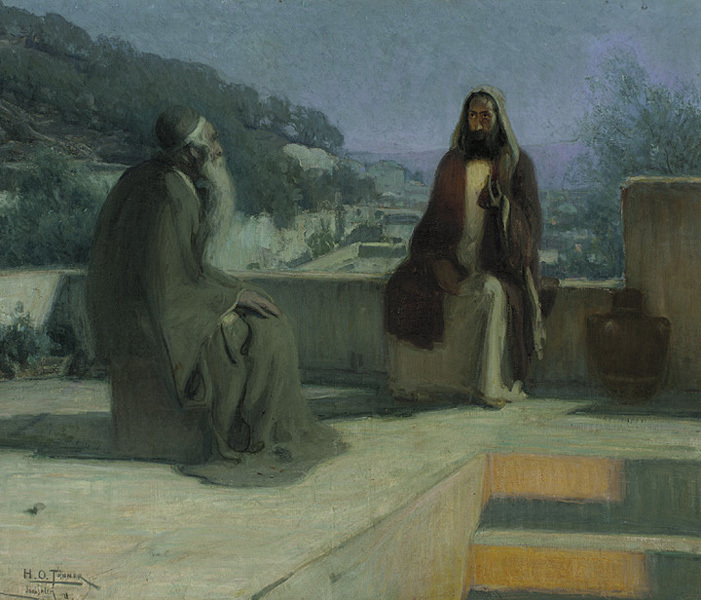 What motivated Nicodemus to meet with Jesus?

Was he an honest seeker or something else? And did something unexpected happen when he met with Jesus?

We often skim over 2:23-25, moving from the confrontation in the Temple to the dialogue with Nicodemus. These three verses provide an informative bridge between those scenes that sets the stage for Nicodemus’ meeting with Jesus.

Let me provide you with a woodenly literal rendering of these three verses that reveals a few issues not immediately apparent in our English translations.

As [Jesus] was in Jerusalem at the feast of the Passover

many believed [pisteuō] in his name, observing the signs he did.

But Jesus did not believe [pisteuō] in them, for he knew all

for he knew what was in the human [anthrōpos].

I have inserted two Greek words that provide helpful insights.

In many translations, the second occurrence of pisteuō appears as “entrust” or “trust.” The common result is that we miss the repetition of this word. The point is that “many believed” in his name, but this believing or trusting was not reciprocated by Jesus.

The other word (anthrōpos) is not the word for a male; it is the word for humans, whether female or male, Gentile or Jew.

One other point is that “he knew all.” The text does not limit that to people or things.

Together, these verses provide us with a general principle of the human condition. The New Living Translation puts it this way: “Jesus didn’t trust them, because he knew human nature.”

John 3:1 opens with, “Now there was a man [anthrōpos] …” These words move us from the general principle regarding humanity to a specific representative of humanity, Nicodemus.

Nicodemus is exhibit #1 for humanity. This is how he is introduced:

Now there was a man of the Pharisees, named Nicodemus, a ruler of the Jews; he came to him by night, and said to him, “Rabbi, we know that you have come from God as a teacher; for no one can do these signs that you do unless God is with him.”

1.         Pharisees are a Jewish religious group with strict regard for the Jewish law. We were introduced to representatives of this group when they challenged John the Baptist in John 1:19-34. They are mentioned about twenty times in John’s Gospel, usually negatively.

2.         Nicodemus is a Greek name, which is somewhat unexpected for a Jewish leader. The name means “conqueror of the people,” or perhaps “victory of the people.”

Bible scholar, Richard Bauckham, has shown credible evidence that there was a victorious Jewish general named Nicodemus ben Gurion during the period of Jewish independence from the Greek occupiers (140 BC – 63 BC). Bauckham concludes that the Nicodemus in John’s Gospel is probably a descendant of Nicodemus ben Gurion and, therefore, a wealthy aristocrat.

3.         A ruler of the Jews indicates he is a member of the Jewish ruling council called the Sanhedrin, composed of seventy Jewish leaders or elders.

There is probably no better representative of Judaism than Nicodemus, given these first three qualities.

4.         He came to him by night. There are several opinions about the reason for this meeting being at night. Was it for secrecy or other reasons? This is the first reference to “night” in this Gospel. As John often uses words and concepts with double meanings, keep in mind that elsewhere he uses night for both physical and spiritual darkness (see 9:4; 11:10; 13:30; 19:39; 21:3).

Notice the use of “we.” This visit is not a personal mission; Nicodemus is coming as a representative. Did the Sanhedrin select him because of his qualifications? Did he volunteer out of curiosity? Or were there other reasons?

Nicodemus states the common opinion of the people, which the Jewish authorities want to challenge and destroy. Seen in this light, this is an introduction to a confrontation.

Jesus takes the initiative and says,

Truly, truly, I say to you, unless one is born [anew/again or from above], he cannot see the kingdom of God.

Let’s look at two intriguing issues in this statement.

As readers, we anticipate the subject of this birth that gives “the right to become children of God,” a birth that is not physical—it is a birth that has its source in God. What more will we learn about this birth from Jesus’ verbal exchanges with Nicodemus?

The Greek word for “anew/again” or “from above” is anōthen. In this context, we can understand it in two ways: in the sense of time (“from the first”) or place “from above.” Again, it is not unlike John to use terms and concepts with double meanings.

Nicodemus understands anōthen in a literal or physical sense of time—starting life over from a fresh beginning:

How can a man be born when he is old? He cannot enter a second time into his mother’s womb and be born, can he?

Jesus is talking about a radically different life.

There are several interpretations, including:

Do not marvel that I said to you [singular], “You [plural] must be born anōthen.

The Greek text distinguishes between singular and plural forms of ‘you.’ Here, Jesus addresses Nicodemus (‘you’ singular) as a representative of ‘you’ (plural). Does the plural refer to the Sanhedrin, the Jewish people, or humanity? My conclusion is that Jesus is addressing the need for this birth to all humanity because Nicodemus is exhibit #1 for humanity (anthōpos), not just Judaism or the Sanhedrin. This means you and me—everyone.

3.         Jesus likens the Spirit to “the wind.” Keep in mind that the Greek word pneuma can be rendered as ‘wind,’ ‘breath,’ or ‘spirit.’ This is a delightful picture from nature demonstrating the absolute reality of the unseen and (to us) mysterious activity of the Spirit of God.

How can these things be?

Is it a scoffing reaction to this idea of a Spirit birth? Is he acknowledging he doesn’t understand? Is it a jaw-dropping realization that there is something radically different about this man Jesus and the birth of which he speaks?

5.         Jesus’ reply affirms that Nicodemus’ attempt to challenge and destroy Jesus has been defeated (3:10). But Jesus doesn’t stop there—his desire is not to beat Nicodemus; it is to bless him and all humanity.

The following five verses are a rich proclamation of the divine desire to give life and bless humanity.

Truly, truly, I say to you [singular], we speak that which we know, and bear witness of that which we have seen; and you [plural] do not receive our witness.

As in 3:7, notice the use of ‘you’ singular and plural. My earlier conclusion is that the plural is humanity—all of us.

But who is the ‘we’ of whom Jesus speaks? Is it the testimony of John the Baptist and Jesus, or something more?

My conclusion is that it is the Spirit and God (the Father) of whom Jesus (the Son) has been speaking—and perhaps we can add all other witnesses including John the Baptist.  In this meeting, the ‘we’ of humanity encounters the ‘we’ of Deity.

The question for each of us is, “Will I continue rejecting God, or will I receive Jesus Christ and be born of God by the Spirit?”

2.         Divine remedy: At 3:14, Jesus refers to an incident from the exodus journey that Nicodemus would know well. You might want to read about it for yourself in Numbers 21:4-9.

The Israelites had spoken against God and Moses. So the LORD sent poisonous snakes among the people. Then the people acknowledged they had sinned and asked for a remedy.

Strange as it seems, the remedy was to make a metal snake and put it up on a pole. If people looked at that metal snake, they lived.

In simple terms, here is the point Jesus is making.

Sin is the cause of death in each of us. Jesus foreshadows being “lifted up” on a cross. Those of us that look to him for life will receive it—or as Jesus puts it, “whoever believes may in Him have eternal life.” (3:15).

What can happen when we meet Jesus? For sure, no one is ever the same after meeting Jesus.

Like Nicodemus, we are brought to a place where we have to choose—to stay where we are (which means death) or to move toward Jesus and His kingdom (which means life).

What choice did Nicodemus make?

For now, ask yourself, “What do I choose?”

BACK TO What Just Happened in the Temple