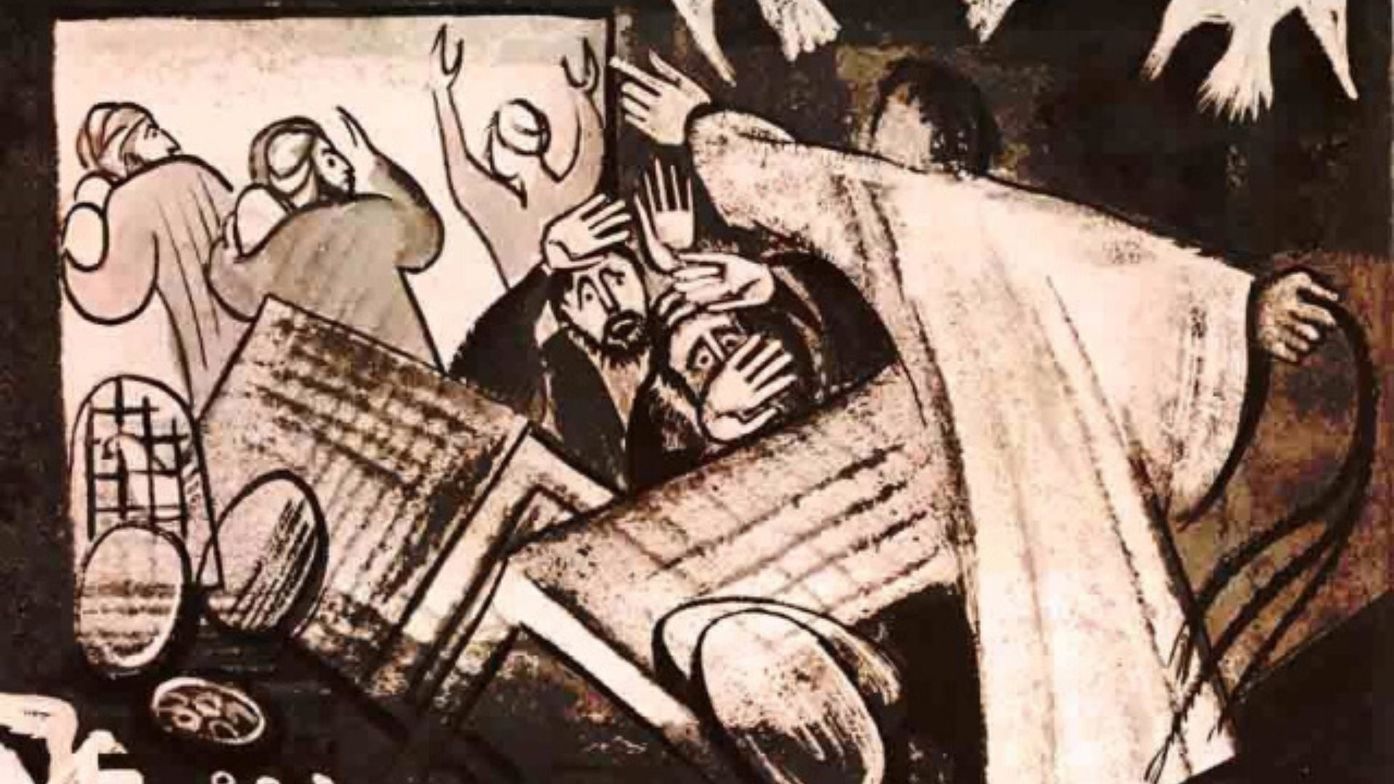 This scene transports us to a defining confrontation with Jesus at the Temple in Jerusalem just before the Passover.

If this is the first time you have read about this, you will not be alone if you ask, “What just happened in the Temple?”

What questions does this text raise for you?

Here are a few possibilities:

Many living in the Middle East in the 1st Century were familiar with the significance of the Passover and the Temple. For us, a brief explanation will be helpful.

About 1400 BC, the Israelites lived as slaves under Pharoah and the Egyptians. A confrontation arose between Pharoah and Moses. In reality, this confrontation was between Egypt’s pantheon of gods and Yahweh, the One True God. There were ten conflicts in the form of plagues (see Exodus 5-12).

These plagues demonstrated the presence, purpose, and power of Yahweh over Egypt and its gods. The Passover was the last and ultimate plague.

As the fourteenth day of Nisan (the first month of the Jewish lunar calendar) was reaching its end at sunset, each household was to kill a lamb and paint its blood around the door of their house. That night, the firstborn of every house died, except for those within houses with blood on their door frames—in those houses, life had already been taken in place of the firstborn (Exodus 12). Reluctantly, a defeated Pharoah released the Israelites. Almost immediately, he had second thoughts. He and his army pursued the Israelites in an attempt to re-enslave them. Instead, they were destroyed in the Red (or Reed) Sea (Exodus 14).

Soon after, on a mountain in the Sinai Peninsula, “Moses went up to God, and the LORD called to him from the mountain, saying,

“Thus you shall say to the house of Jacob and tell the sons of Israel:

‘You yourselves have seen what I did to the Egyptians, and how I bore you on eagles’ wings, and brought you to Myself. Now then, if you will indeed obey My voice and keep My covenant, then you shall be My own possession among all the peoples, for all the earth is Mine; and you shall be to Me a kingdom of priests and a holy nation.’ (Exodus 19:3-6)

This was a declaration of God’s presence, purpose, and power among the Israelites. The condition of its continuation was, “if you will indeed obey My voice and keep My covenant.”

Each year after that, Israelites were to celebrate the Passover and its deliverance as a rich reminder of God’s presence, purpose, and power.

During their travels through the Sinai Peninsula, the Israelites followed a pillar of cloud during the day and camped around a pillar of light at night. This pillar manifested God's presence, purpose, and power among the Israelites. In the middle of the camp was a tent or tabernacle where God dwelled among his people, and where they worshiped Him.

Centuries later, the time came for making a more permanent structure—a Temple. Solomon constructed this Temple in Jerusalem and completed it in 957 BC (1 Kings 6-8). Here is what we read after Solomon’s prayer of dedication:

This was a manifestation of God’s presence, purpose, and power among the Israelites. The condition of its continuation appears in 2 Chronicles 7:11-22, which includes these well-known words:

if my people, who are called by my name, will humble themselves and pray and seek my face and turn from their wicked ways, then will I hear from heaven and will forgive their sin and will heal their land. (7:14 NIV)

Because of Israel’s unfaithfulness, Babylonians conquered and exiled the Israelites, and in 587/6 BC, and destroyed the first Temple. About 70 years later, a relatively small number of Jewish people returned to Jerusalem and built a modest second temple on the same site as the first (516 BC).

From the time of the Babylonian conquest, Israel lived under the domination of foreign empires. First, Babylon was succeeded by Persia, then the Greeks, and after a short-lived Jewish revolution (141-63 BC), the Romans.

Under the Romans, Herod the Great ruled as a client king over Judea (37-4 BC). In the eighteen year of his reign (19 BC), Herod began reconstructing and expanding the Temple and its enclosure on a grand scale. This Temple and its courtyards enclosed 36 acres.

The layout of the Temple enclosure included the Temple proper and walls enclosing outer courts, porches, porticoes, and other lesser buildings. In Greek, the whole Temple area was the hieros. The Temple itself was divided into two areas: the holy place and the holiest of holies, which is the naos or ‘habitation of God.’ The importance of these two Greek words will become evident in a moment.

Now that you have glimpsed something of God’s presence, purpose, and power in the original Passover and the dedication of the first Temple, what greets us in Herod’s Temple at the approach of this “Passover of the Jews” (2:1) is a shocking contrast.

He encountered within the enclosure of the Temple (hieros) a crowded marketplace selling oxen, sheep, and doves, together with currency exchangers—no doubt all rationalized as necessary tokens of worship. Noise, congestion, and stench of lowing oxen, bleating sheep, shouting traders, and complaining consumers filled the courtyards. Worshipping God had deteriorated into big business.

At first, we might find the actions of Jesus surprising. He made a whip of rushes (schoinion), probably picked up from the ground around the oxen and sheep. He then drove out the livestock, overturned the moneychangers’ tables, and said (none-to-quietly, I suspect), “Take these things away; stop making My Father’s house a house of merchandise” (2:16), or as The Message puts it:

“Get your things out of here! Stop turning my Father’s house into a shopping mall!”

Later, the disciples remembered the text, “Zeal for Thy house will consume me”—quoting Psalm 69:9.

May those who wait for You not be ashamed through me, O Lord GOD of hosts;

May those who seek You not be dishonored through me, O God of Israel,

Because for Your sake I have borne reproach;

Dishonor has covered my face.

I have become estranged from my brothers

And an alien to my mother’s sons.

For zeal for Your house has consumed me,

And the reproaches of those who reproach You have fallen on me.

One commentator observes that “The psalmist is declaring that the people were reviling God by their worship, and [Jesus’] public protest has caused them to begin to revile him as well.”

From the perspective of Jesus, the activities of those selling livestock and exchanging money were sacrilege—they dishonored God.

The Temple authorities didn’t see it that way.

The Jewish authorities demanded that Jesus prove his authority for doing what he just did:

Jesus’ response is puzzling, even nonsensical, to those listening. It was not until two years later that the disciples understood the significance of what he said.

“Destroy this temple (naos), and in three days I will raise it up.”

The officials missed the significance of Jesus’ words in at least two ways:

These officials seem calloused to the absence of God’s presence, purpose, and power in the Temple and their own lives. Fixated on their attack on Jesus that they can only respond scoffingly:

“It took forty-six years to build this temple [naos], and will You raise it up in three days?”

At this point, the narrator inserts an editorial comment for us:

“But He was speaking of the temple [naos] of His body.”

John provides us with the significance of Jesus’ statement in light of His crucifixion and resurrection, which would occur two years later.

I refer to this scene as a defining confrontation with Jesus in the opening sentence. It is ‘defining’ in that:

1.         The Jewish authorities demonstrate their opposition to Jesus. They are determined to preserve their institution and their power, both of which Jesus is challenging. This resonates with the prologue: “He came to His own and those who were His own did not receive Him” (1:11).

2.         As for the disciples, how did they understand Jesus’ statement: “Destroy this temple, and in three days I will raise it up” (2:19)? Were they puzzled or confused by what Jesus said?

Did this scene sit uneasily in their memories? What did He mean?

The puzzle was solved by the crucifixion (“destroy this naos”) and resurrection (“in three days I will raise it up”) of the Lord Jesus. Then, the disciples “believed the Scripture, and the word which Jesus had spoken” (2:22). Then they realized that Jesus Christ is the naos—God dwelling among us (1:14)—not some massive stone building in Jerusalem.

The reader is not required to wait two years for the puzzle to be solved. Instead, we benefit from John’s recollections as he explains the meaning of Jesus’ words.

But this explanation raises other questions. For instance, what is the meaning of this startling insertion: “when therefore He was raised from the dead”?

It remains for us to continue watching and listening as we discover more about Jesus.

At this point, how does this scene affect you? What have you discovered? What are you coming to believe about Jesus?

In the next post, we listen to a personal encounter between Nicodemus, a ruler of the Jews, and Jesus.

BACK TO How is Changing Water to Wine a Miracle?

Image credits: (1) Clearing the Temple: From oneworldhouse.net; (2) Passover: From: https://sayaeducation.com/; (3) Destruction of Jerusalem: “The Flight of the Prisoners” by James Tissot (1836-1902) with permission of www.jamestissot.org by Creative Commons License (http://creativecommons.org/licenses/by-nc-nd/3.0/); and (4) Model of Herod’s Temple: Berthold Werner, Public domain, via Wikimedia Commons.