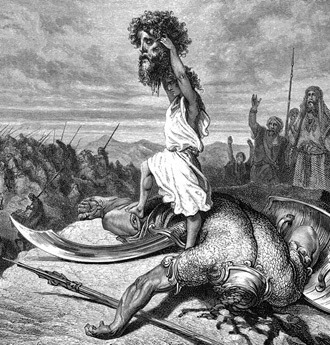 As we approach 1000 B.C., God’s ‘Story’ shifts from the turmoil of Judges to the potential of Kings.

In our survey of 1 and 2 Samuel we encounter three main characters:

We begin with a woman named Hannah who is childless – a condition that bore disgrace in that culture. And yet this woman is nobler than the high priest, Eli (1 Samuel 1).

She prays for a son and the LORD answers her. Her son is named Samuel whom she dedicates: “I give him to the LORD. For his whole life, he will be given over to the LORD” (1:28). Her prayer is a hymn of rich praise and prophetic insight (2:1-10).

As we follow the growth of Samuel we are introduced to a man who becomes a focus of blessing and revival to Israel (3:17-4:1a).

Much later, when Samuel is Israel’s judge, his sons are appointed under him but they “did not walk in his ways. They turned aside after dishonest gain and accepted bribes and perverted justice” (8:1-3). This is the trigger for Israel to demand “a king to lead us, such as all the other nations have” (8:5). On one hand, we might rationalize their demand – but in reality, they were rejecting the LORD as their king (8:6-9).

This marks the shift from theocracy to the monarchy in Israel.

Saul was Israel’s first king. He was big and strong but deeply flawed.

He was dark and moody, hesitant and faltering: hiding among baggage (10:22-27), failing to fight the Philistines (13:1-10), and paralyzed before Goliath (chapter 17). Samuel declares God’s word to Saul:

From this point, Saul is effectively finished although he continues to reign for years until committing suicide on a battlefield (chapter 31).

The LORD “sought out a man after his own heart.”

That man is a teenager named David – the youngest of eight brothers, from an unimportant family, living in an insignificant village called Bethlehem (16:1-13).

David captures our attention and our imagination as he delivers supplies to a battlefield. There a giant named Goliath not only taunts Israel’s army, but also slanders Israel’s God: the one true God; Creator of all; the God of Abraham, Isaac, Jacob, and Moses; Yahweh.

Goliath is over nine feet tall – a muscled war machine (17:4-7). David is a teenager with a heart for God – and some experience of protecting sheep from predators (17:33-37).

David demonstrates his heart for God. With no weapons except a stone in a sling and courageous faith in the LORD, he kills Goliath with the giant’s own sword.

As we read the remainder of 1 Samuel we follow David through the crucible of faith as he is developed into an effective leader for God’s people.

The book of 2 Samuel moves us through the reign of David as king of Israel – and the life of David as a man.

There is a period during which David’s authority is consolidated over all the tribes of Israel. Then he battles against Israel’s oppressors and enemies.

In 2 Samuel 5:6-15, David conquers the city of Jerusalem whose Jebusite inhabitants had resisted conquest for centuries. He makes it his capital. Things are good.

2 Samuel 7 is a significant chapter regarding David’s dynasty. It is here that the LORD declares a covenant with David:

“the LORD himself will establish a house for you: when your days are over and you rest with your fathers, I will raise up your offspring [literally, “seed” (singular)] to succeed you, who will come from your own body, and I will establish his kingdom” (see 7:11b-16).

This covenant has long been associated with the coming Messiah or Christ.[1] Bruce Waltke states that “Israel draped the magnificent royal psalms as robes on each successive king, but generation after generation the shoulders of the reigning monarch proved too narrow and the robe slipped off to be draped on his successor.”[2] Eventually and ultimately, this covenant is fulfilled in Jesus Christ … but we’re getting ahead of ourselves.

At the pinnacle of his reign, David makes a horrid decision for which he and his family pay dearly.

In the season when David should have been leading his army he’s lounging in his palace. He sees, desires, and takes the wife of one of his officers. She becomes pregnant. Her name is Bathsheba, the wife of Uriah (11:1-5).

In an attempt to cover his sinful actions, David engineers Uriah’s death in battle (11:6-27).

David has committed adultery, arranged a murder, and abused the trust of a nation. He is unmasked publicly by Nathan the prophet (12:1-14). Although we are not reading the Psalms in the Historical Backbone of the Bible, Psalm 51 gives us a glimpse of what was going on in David’s heart after the confrontation with Nathan.

What follows is a litany of death and sexual abuse within David’s own household. One of his sons, Absalom, leads a rebellion that temporarily displaces David from Jerusalem. The rebellion is quashed with the killing of Absalom.

What happened to the man who was called “a man after God’s heart”?