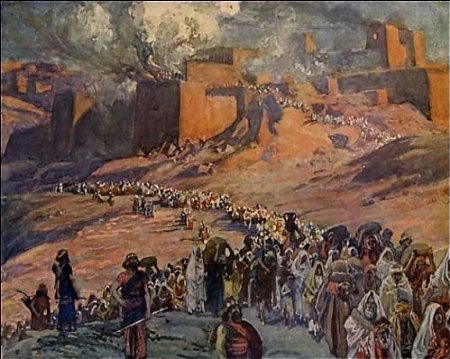 Solomon represents glory days for Israel; the Exile, a desperate time. Between these two are four centuries of national decline interrupted by moments of revival.

Let’s touch on four important points of God’s ‘story’ in the books of 1 and 2 Kings as we move through the Historical Backbone of the Bible.

What comes to mind when you hear the name of Solomon?

Perhaps you think of wisdom, magnificence, grandeur, and splendor. After all, Solomon is credited for most of the Proverbs – and they’re full of wisdom. He's also responsible for the construction of the Temple – it was magnificent.

But King Solomon loved many foreign women … his wives led him astray. As Solomon grew old, his wives turned his heart after other gods, and his heart was not fully devoted to the LORD his God …

The departure had already begun.

Rehoboam becomes king after the death of his father, Solomon.

He refuses to lighten the repressive taxes and duties laid on the people by Solomon. As a result, they rebel and the kingdom is split in two.

The tribes of Judah and Benjamin, together with the priestly tribe of Levi, remain loyal to Rehoboam. This constitutes the southern kingdom of Judah with its capital at Jerusalem under the dynasty of David’s descendants.

The remainder of the tribes become a separate kingdom to the north called Israel with its capital at Samaria. The first king is Jeroboam.

Jeroboam institutes a national religion to keep the people from going to the Temple in Jerusalem (1 Kings 12:25-33):

After seeking advice, [Jeroboam] made two golden calves. He said to the people “It is too much for you to go up to Jerusalem. Here are your gods, O Israel, who brought you up out of Egypt.” One he set up in Bethel, and the other in Dan. And this thing became a sin …

Much of 1 and 2 Kings is a record of the various kings of these two kingdoms and some notable events.

Every king of the northern kingdom of Israel was bad.

God is still present and active in both Israel and Judah. For instance, the prophet Elijah was God’s representative in the northern kingdom (1 Kings 17 – 2 Kings 1).

In 722 B.C. Shalmaneser V, king of Assyria conquers Samaria and deports the population of the northern kingdom (Israel) to other parts of his extensive empire. Other people are brought in to resettle the northern kingdom. Their descendants are the Samaritans we read about in the New Testament (e.g., John 4; Luke 10:25-37). These events are related in 2 Kings 17.

“All this took place because the Israelites had sinned against the LORD their God …” (17:7-23).

Of the 20 kings in the southern kingdom of Judah, most are bad – but a few are good.

God’s judgment of Judah comes to a head at the end of 2 Kings.

Nebuchadnezzar, king of the Babylonian empire, is now the dominant imperial force. After his army defeats Egypt at the Battle of Carchemish (605 B.C.), Judah’s king Jehoiakim pledges alliance to Nebuchadnezzar (24:1 ca. 603 B.C.).

Two years later, Jehoiakim rebels despite warnings from the prophet Jeremiah. Nebuchadnezzar’s army returns and lays siege to Jerusalem. Jehoiakim dies during the siege and his son, Jehoiachin, becomes king.

Zedekiah later rebels and in 587/586 B.C. Nebuchadnezzar again conquers Jerusalem. This time he destroys the Temple and tears down the city walls. The remaining people are exiled to Babylon (2 Kings 24:20b-25:26).

The narrative reports that “it was because of the LORD’s anger that all of this happened to Jerusalem and Judah, and in the end he thrust them from his presence” (24:20).

What insights are you gaining about this history of God's 'story'?

There have been no kings of Israel in the line of David from that time until … but we’re getting ahead of ourselves.

Photo credit: "The Flight of the Prisoners" by James Tissot (1836-1902) with permission of www.jamestissot.org by Creative Commons License (http://creativecommons.org/licenses/by-nc-nd/3.0/).

[1] The dates are approximate. Elsewhere the abbreviation ca. is used with a date to indicate that it is “circa” or approximately a particular year.