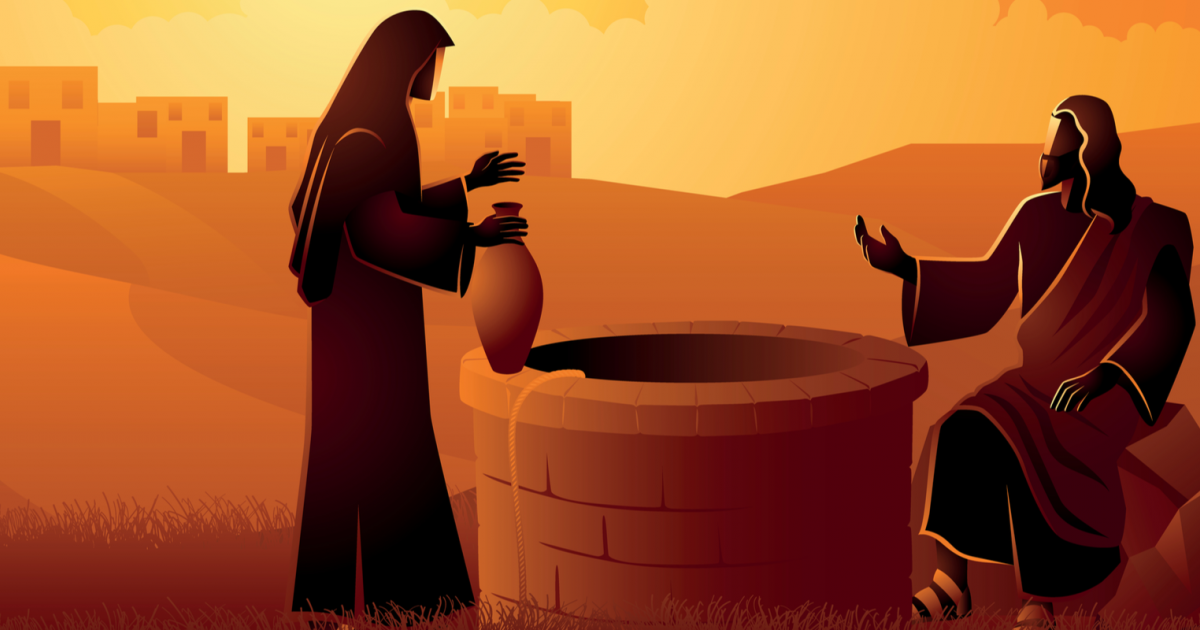 Jesus’ encounter with a Samaritan woman is stranger than it seems.

Once we begin to understand who the Samaritans were, who this woman was, and the conversation that took place, we begin to discern how scandalous the encounter was—and yet …

Take a few moments to read John 4:1-26, then let’s look at some aspects of this Jesus encounter with this unnamed Samaritan woman.

Jesus travels from the southern area of Judea toward Galilee in the north. The region of Samaria lies between the two.

There was great animosity between the Samaritans and the Jews. Historically, the Samaritans were a remainder of Israelites left after the Assyrian conquest of 722 B.C. (2 Kings 17). To the Jews of the southern kingdom of Judea, the Samaritans were ethnically, religiously, and culturally despised. As I understand it, Jewish people usually crossed the Jordan River and went around Samaria rather than encounter the Samaritans.

Surprisingly, we read that Jesus “had to go through Samaria” (4:4). After a day of travel, a weary Jesus sat by the village well at Sychar while his disciples went to get food.

As for the time of day, it was “about the sixth hour.” Many commentators, following Jewish timekeeping, conclude this is about noon. A few others suggest that John uses the Roman method, which makes this about six in the evening. Considering John’s references to daily time, I lean toward the Roman practice.

Whether it is noon or near supper time, the well is abandoned—all but for Jesus and an approaching Samaritan woman. Everyone else would have gathered their water earlier and were enjoying their meals at home.

Jesus opens this apparently random encounter with a provocative request:

Will you give me a drink?

Given the hostility between Jew and Samaritan, the woman’s response is understandable:

You are a Jew and I am a Samaritan woman. How can you ask me for a drink?

A Jewish person drinking from a Samaritan vessel would have been rendered ritually unclean. And note, she mentions that she is “a Samaritan woman.” So in her mind, there was a vast chasm between her and this tired Jew.

Jesus now shifts the conversation from his request to her need.

If you knew the gift of God and who it is that asks you for a drink, you would have asked him and he would have given you living water.

Intrigued by this offer of “living water,” the woman calls him “sir” and asks how he would draw the water from the well and whether he was greater than Jacob.

The word “sir” is kurios in Greek and is often translated as “lord.” Here, it is a simple term of respect. After all, he was interested in her need.

Jesus now introduces the meaning of “living water”—a “spring of water welling up to eternal life.”

The woman misunderstands. She hopes for a source of water available to her on demand. That would eliminate the arduous trips to the village well.

Jesus reveals that she has a more real need than a source of fresh water. So, he shifts the subject and presses the “big hot button” in her life.

Earlier, we mentioned that the well was abandoned at the sixth hour of the day. All other users of the well had come and gone. However, this woman came to the well herself, suggesting that she was a social outcast even among her people.

Jesus says to her,

Go, call your husband and come back.

The woman deflects the request by saying, “I have no husband,” which was not a lie but far from the truth.

Jesus pierces her pretense and lays her life-situation bare:

You are right when you say you have no husband. The fact is, you have had five husbands, and the man you now have is not your husband. What you have just said is quite true.

I suspect the woman is shocked as her secret is out in the open with this mysterious man—the seventh man in her life.

Despite her shock, the woman recovers quickly.

Sir, I can see you are a prophet. Our fathers worshipped on this mountain, but you Jews claim that the place where we must worship is in Jerusalem.

Her reply has the earmarks of defensiveness. Her tactic is to retreat to the deep rift between Samaritans and Jews. She chooses worship as the issue and which mountain is the right place to worship—the mountain at Jerusalem or the mountain in Samaria.

I wondered why she chose worship as the point of deflection. Perhaps, like everyone else, the most profound need of each of us is that gaping void in our souls that only the one true God can fill.

Although Jesus acknowledges the Jewish-Samaritan divide on the issue of worship, he boldly states that worship is about a person, not a place.

Jesus states that God is seeking worshipers—worshipers of a certain kind:

Jesus speaks to this woman’s real need with grace and truth.

Now, the woman is not defensive. By implication, she agrees with Jesus and says,

I know that Messiah (called Christ) is coming. When he comes, he will explain everything to us.

Little does she realize that the Christ is already speaking with her. Jesus responds with,

I who speak to you am he.

Jesus’ response includes the phrase egō eimi, the first of 24 occurrences of this significant phrase in John’s Gospel.

On its own, eimi means “I am.” However, adding egō (I) intensifies the pronouncement.

In Exodus 3, the LORD—Yahweh—revealed himself to Moses at the bush that burned but was not consumed. There, Yahweh self-disclosed himself as “I AM” (Exodus 3:14):

This is what you are to say to the Israelites:

The translators have wrestled with Jesus’ pronouncement. Here is a selection:

These are all good translations that might not entirely communicate the fullness of what Jesus says.

Jesus is taking up the words of Exodus 3 and stating that he is the “I AM” who is speaking to her.

1.     Jesus speaks to a person utterly different from Nicodemus, the elite Pharisee in Jewish society. She is a Samaritan, a woman and unnamed. Yet, this unnamed woman was no less valued or respected by Jesus.

2.     As this Samaritan woman speaks with Jesus, she responds with increasing interest and respect. At first, she sees a tired Jew. She then refers to him by the polite term “sir” (4:11, 15, 19). At the revelation of her ‘secret,’ she sees him as “a prophet.”

3.     Jesus self-discloses himself to this woman as Yahweh did to Moses—something he did not do with Nicodemus. Jesus pronounces that he is the great “I AM.” One cannot continue to read John’s Gospel seeing a tired Jew—instead, we must view him as the Word made flesh dwelling among us.

You might want to list the differences between Nicodemus and this unnamed Samaritan woman: gender, name/unnamed, ethnicity, social status—even the subject of their conversation. However, the woman's response was positive, which is also different than Nicodemus.

We have an amazing Savior who walked this earth and continues to be present.

What are your thoughts? Let me know by clicking here.

BACK TO “6 Wonderful Things about Eternal Life”