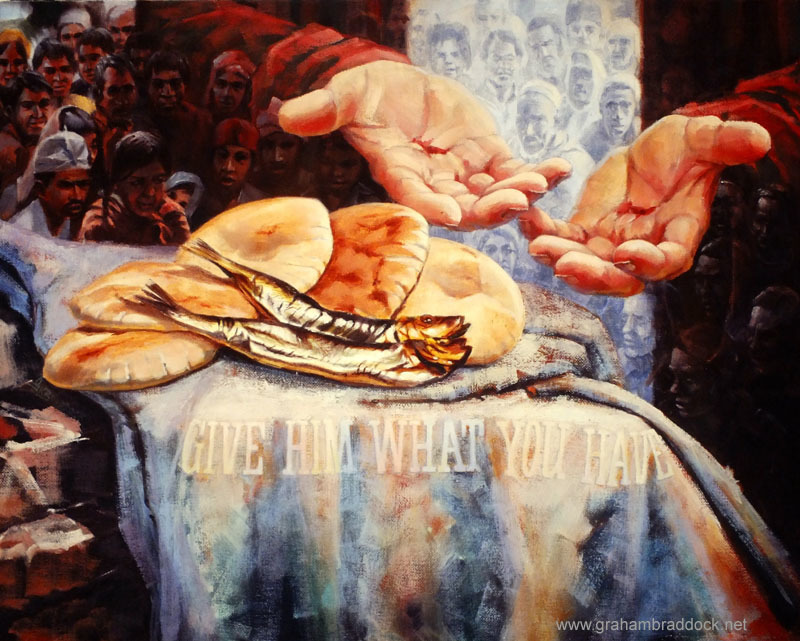 What would you do if five people unexpectedly showed up at your house for supper?

You would probably feed those five guests as a caring and responsible host or hostess.

Now, what if more than 5,000 showed up? That’s a problem of a different magnitude. Nevertheless, that’s what faced the disciples.

We’re getting ahead of ourselves. Let’s look at the text.

Reading the biblical text is essential. Here is John 6:1-15 (NASB):

6:1 After these things Jesus went away to the other side of the Sea of Galilee (or Tiberias). 2 A large crowd followed Him, because they saw the signs which He was performing on those who were sick. 3 Then Jesus went up on the mountain, and there He sat down with His disciples. 4 Now the Passover, the feast of the Jews, was near.

5 Therefore Jesus, lifting up His eyes and seeing that a large crowd was coming to Him, said to Philip, “Where are we to buy bread, so that these may eat?” 6 This He was saying to test him, for He Himself knew what He was intending to do. 7 Philip answered Him, “Two hundred denarii worth of bread is not sufficient for them, for everyone to receive a little.” 8 One of His disciples, Andrew, Simon Peter’s brother, said to Him, 9 “There is a lad here who has five barley loaves and two fish, but what are these for so many people?”

10 Jesus said, “Have the people sit down.” Now there was much grass in the place. So the men sat down, in number about five thousand. 11 Jesus then took the loaves, and having given thanks, He distributed to those who were seated; likewise also of the fish as much as they wanted. 12 When they were filled, He said to His disciples, “Gather up the leftover fragments so that nothing will be lost.” 13 So they gathered them up, and filled twelve baskets with fragments from the five barley loaves which were left over by those who had eaten.

14 Therefore when the people saw the sign which He had performed, they said, “This is truly the Prophet who is to come into the world.” 15 So Jesus, perceiving that they were intending to come and take Him by force to make Him king, withdrew again to the mountain by Himself alone.

Verses 1-4 introduce the general time and place. The concluding verses (14-15) show the people’s response. We will consider the problematic attitude of the crowd in a future post. For now, we will focus on the “sign” itself.

John gives us a few clues that orient us. Here are four:

However, some prefer denying the evidence.

A good friend and I were chatting about this sign some time ago. He mentioned the main attempt of some to deny this miracle.

To discredit this miracle, some imagine that the little boy sharing his lunch became an example that others followed. These “others” shared their food resulting in enough for everyone.

Given the evidence, this challenge fails for several reasons, including:

A reasonable reading leads us to conclude that 5,000 men (plus women and children) were fed “as much as they wanted” (6:11) from the five loaves and the two fish supplied by a little boy.

First, keep in mind the reference to the Passover. Add to this the location and nature of the sign: feeding a multitude in the wilderness. Then, as I said earlier, Jesus will mention the manna provided by Yahweh to Israel in the wilderness (John 6:31-33 compare to Exodus 16).

In the same way that Yahweh provided food to Israel in the wilderness, Jesus supplies food to this crowd of people. So what does this say about Jesus?

Jesus is standing before the people as Yahweh!

Second, what impact did this sign have on the disciples?

What was going through the disciples' minds as they watched Jesus distribute the five loaves and the two fish among the thousands of people? Then, each disciple held a basket full of the little boy’s loaves.

I don’t know about you, but if I were one of those disciples, I would have been silent and astounded by what had just happened.   Who is this man that he can do such things?

Is this not “the Christ, the Son of God!”

Third, what impact is this sign making on you?

So far, John, an eyewitness, has recorded how Jesus:

What can Jesus do with you and me and the meager resources we offer?

Are we beginning to realize there is no limit to what this man can do?

Let me know what other insights you have. You can contact me here.

Photo credit: “Loaves and Fishes 2” by Graham Braddock. [https://graham-braddock.pixels.com/featured/loaves-and-fishes-2-graham-braddock.html] An earlier version of Mr. Braddock’s home page stated: “You are welcome to browse and download any of the images for personal, powerpoint, or non-profit use.” This is a non-profit use.