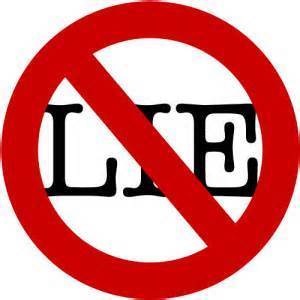 Our discussion group reconvened and we settled into our chairs to continue wrestling with the question: “Is it ever right to lie?” (Part 1).

In our previous meeting (Part 2), we surveyed arguments used by those who believe it is okay to lie in certain circumstances. This left us with several unanswered questions, including “What are the circumstances that justify lying?”

In this post (Part 3), I will summarize our exploration of some of the arguments used by those who believe it is not right to lie in any circumstances. In the back of my mind, I was wondering what I would learn that would equip me to respond rightly in situations such as Corrie ten Boom's scenario (refer to earlier post) – but for now, that would have to wait.

Our conversation leader outlined the main points proposed for this discussion. As before, this is a synopsis of the discussion and does not necessarily reflect my position.

Our facilitator first asked for Biblical texts that clearly stated we should not lie. There were many responses.

One participant read the ninth commandment: “You shall not give false testimony against your neighbor” (Exodus 20:16; Deuteronomy 5:20). Although this seems to be in the context of a court trial, nevertheless we cannot discount that it speaks to the issue of not lying. For instance, Proverbs 14:5 states, “A truthful witness does not deceive, but a false witness pours out lies.”

Here are a few of the other texts that were raised:

There are many other texts condemning lies and lying (more can be found here and here). We were encouraged to read and understand these verses within their proper contexts.

One contributor pointed out that the texts usually contrasted lying with a positive quality such as love of God’s law; God’s delight in truthful people; the new self; and so on. This simple comment resonated with me. Is it possible we were focusing on the wrong thing (i.e., lying rather than truth)?

What is a liar?

Some of the biblical texts identified “liars” and their condemnation (e.g., Revelation 21:8). The question was asked,

“What is a liar?” Is it a person who tells a lie occasionally, or is it something else?

The responses suggested that there is a difference between an isolated incident of lying and a habit of lying. The first person told a lie; the latter person is a liar.

The comparison was made with drinking alcohol. A person may drink too much one time and get drunk. As wrong as that is, that doesn’t make the person a drunkard or an alcoholic. However, a person who drinks to excess habitually is a drunkard – that person is characterized by being drunk. That is not to say that there is no remedy for such character – God’s power through the gospel of Christ can transform the character of such people to make them Christ-like.

In this context, we read a few texts including Revelation 21:8:

… the cowardly, the unbelieving, the vile, the murderers, the sexually immoral, those who practice magic arts, the idolaters and all liars – their place will be in the fiery lake of burning sulfur. This is the second death.

As this and related texts were read, it is evident that being a liar had severe ramifications. Our discussion became somewhat hushed for a few moments as we realized that people characterized by these traits had alienated themselves from God.

For our next discussion point, our facilitator identified three Christian theologians and philosophers who argued that it was never right to lie, a position sometimes referred to as unqualified absolutism.

The first was Augustine (354-430 A.D.) who wrote two books on our subject: Contra Mendacium (Against Lying) and De Mendacio (Of Lying).

Augustine argued that lying was always wrong but recognized that this may be neither practical nor realistic because of the human condition. As a result, he developed a hierarchy of eight types of lies, some of which are forgivable. The worst were lies told in teaching religion, followed by lies that hurt someone without benefitting others.

Next, we considered the position of Thomas Aquinas (1225-1274) who wrote in his Summa Theologica that lying was always wrong. He provided a hierarchy of three types of lying. The first was a lie told to do harm (a malicious lie) and was a “mortal sin”; the last two were “venial sins” (not as serious and entirely forgivable) and included a lie told in fun and a “helpful lie.”

Then the position of the German philosopher and theologian, Emmanuel Kant (1724-1804) was discussed.

Kant believed that lying was always wrong. He appeared to be less flexible in his position than Augustine and Aquinas. He argued along the lines that only those principles that were universal could be good – and there was no universal principle that allowed for lying, so it was never morally permissible. One of Kant’s quotes is, “By a lie a man throws away and, as it were, annihilates his dignity as a man.”

Critics of Kant often use a scenario similar to Corrie ten Boom’s situation. A person pursued by a murderer hides in Kant’s house. The murderer shows up at the door and wants to know where the person is that he’s chasing. What would Kant do or say to the murderer?

What at first appeared a black-and-white stance by Kant gets a bit murky. He seems to allow that a person who is acting outside of his or her proper authority, or a person seeking to limit another’s freedom improperly, has no entitlement to the truth. What does that mean, and what or who determines “proper authority,” “improperly limit,” “another's freedom,” and so on?

The discussion went back and forth on the positions and merits of each of these notable people. There was little (if any) resolution. I felt a headache coming on.

What I was left with from this part of our discussion was the general (but firmly stated) position that lying is never right – but, if you do lie then seek an ethical loophole (in the case of Kant), or seek forgiveness (in the cases of Augustine and Aquinas). All-in-all, this left me somewhat unsatisfied in so many ways.

More than one discussion partner raised instances in the Bible in which people lied and seemed to get away with it. The one case raised most frequently was that of Rahab hiding the Israelite spies and lying to the Jericho authorities (Joshua 2).

The list of examples grew as others raised the situation in which Abraham lied to Pharaoh (Genesis 12); Jacob lied to his father, Isaac (Genesis 27); and God appeared to counsel deceit in the conquest of Ai (Joshua 8) and Samuel’s visit to Jesse (1 Samuel 16). The situations, reasons, and outcomes among these instances varied widely. We felt that an examination of some of these cases could be a fruitful field of inquiry.

So, the next post will examine some of the instances of lying in the Bible. Our goal will be to see if we can discern some common issues and helpful guidelines for living a God-honoring life with competence and joy.

Throughout this short series, I invite you to keep writing to me with your questions, your proposals, your practices, and whatever else speaks into a way of living that honors God and blesses people. You can contact me by clicking here.

To make sure you don't miss future installments of this series, click here to subscribe. I hope to hear from you soon.