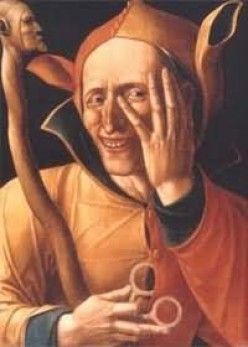 Where do we start if we want to learn about being a leader – not a fool or an impostor?

There are almost as many starting points as there are books and theories about leadership. So which do you choose?

As I look at leadership books on my shelves I see titles that include excellence, competence, primal, contrarian, challenge, heroic, and, biblical. One is even called Leaders, Fools and Impostors by Manfred Kets de Vries. There is much overlap and disagreement among these books.

As I’ve written elsewhere (see “Is that you God?”), my orientation is bounded or defined by three elements: the Bible; the person and work of Jesus Christ; and, God’s character of love.

If I was writing a book on leadership, it probably would be titled “Leading like Jesus” – but I’m getting ahead of myself.

Starting at the beginning

As with most things, the beginning is a good place to start.

Given my declared orientation, that would be Genesis 1.

Opening the first page of the Bible introduces us to a ‘Story’ of universal and eternal proportions: “In the beginning God created …” (Genesis 1:1).

By ‘story’ I do not mean fiction. As I’ve written before, if I asked you “What’s your story?” you would select and arrange various facts about people, places, and experiences that tell me something about your life.

Genesis is the beginning of God’s ‘Story’. It is a selection and arrangement of various significant facts about people, places, and experiences that tell us what we need to know about:

and much more. It doesn't tell us everything; it tells us what we need to know.

The climactic act of the Creation narrative is God making humanity (Genesis 1:26-30):

in the image of God he created him;

male and female he created them.

One aspect of being ‘image of God’ is relationship: relationship with God, other humans, and Creation. These relationships may be illustrated in simple terms as:

As for humanity's relationship to God, they received from God his extravagant generosity. Only one thing was withheld: “you must not eat from the tree of knowledge of good and evil, for when you eat of it you will surely die” (2:17). This tree and its fruit were good, but  they were exclusively for God.

As between humans, there is no sense of dominating or “power over”  or competing with one another. In the case of the relationship between Adam and Eve we have insight into their intended mutuality and interdependence.

But this state of relationships did not last.

Stepping over the line

Every relationship is defined by boundaries.

For instance, one boundary of the relationship of marriage is that the sexual intimacy of the husband is exclusively for his wife; and of the wife for her husband. To step over, or transgress, this boundary and allow such intimacy with someone who is not the husband or the wife is adultery. That stepping over the line damages or destroys the relationship.

So it was with humanity’s relationship with God.

As for the relationship between humans, we now experience competition, rebellion, murder, blame, denial – and a host of other dynamics that have become the new “normal” among humans. This has direct impact on "leadership."

God did not walk away from his Creation. Instead, he entered into it in a most unexpected, and sacrificial way.

God “enfleshed” himself as a human being – and his name is “Jesus.” It is Jesus who became the new image:

In this way Jesus Christ became the new Adam for a new humanity in a new Creation. This has a direct impact on "leadership."

"All authority in heaven and on earth has been given to me."

Do you get that? “All authority” – there is nothing else.

What do you think of Jesus' claim?

If you aspire to lead, which will you be?

We’ve probably met our share of the fools and impostors playing at “leadership.” They are manifest by their power games, control, manipulation, abuse, self-centeredness, and incompetence.

If I’m going to learn what it is to be a leader – a real leader, a true leader – I have to watch and listen to Jesus.  I have to be leading like Jesus.