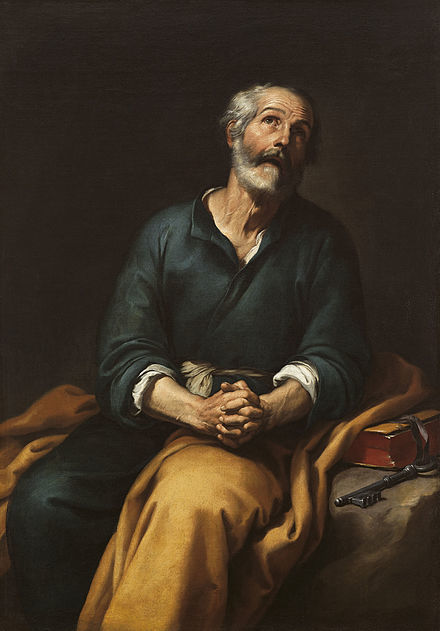 He made back-to-back statements to Jesus.

His first statement was so right; his second, so wrong.

In this contradiction, Peter exposes a crisis of discipleship familiar to every follower of Jesus.

The argument with God comes in the nature of Peter’s rebuke of Jesus in Matthew 16.

Jesus had begun “to show his disciples that he must go to Jerusalem and suffer may things from the elders and chief priests and scribes, and be killed, and on the third day be raised” (16:21).

Before we consider how and why this response is so wrong, let’s go back one scene.

Jesus asks his disciples, “Who do people say that the Son of Man is?”

The context leads us to conclude that Jesus refers to himself as “Son of Man,” drawing in the Old Testament prophecy of Daniel (e.g., Daniel 7:13-14).  The predominant positions are that he is an Elijah-like prophet of national renewal using displays of heavenly power, or a Jeremiah-like prophet pronouncing national judgment and experiencing opposition (Matthew 16:13-14).

Jesus then asks, “But who do you say that I am?”  Simon Peter replies, “You are the Christ, the Son of the living God.”

To this Jesus answers with (among other things), “Blessed are you Simon Bar-Jonah!  For flesh and blood has not revealed this to you, but my Father who is in heaven” (16:15-20).

Peter’s response concerning the identity of Jesus is divinely revealed.  His is a clear, unambiguous declaration of who Jesus is: “the Christ [the Messiah, the Anointed One], the Son of the living God.”  Peter’s first statement is about orthodoxy – it is a statement of right belief – and his statement is so right.

We return to the next scene in which Peter rebukes Jesus.  Peter is so wrong for several reasons.  First, how can Peter express strong disapproval of what Jesus has said?  After all, did Peter not rightly declare that Jesus is the Christ, the Son of the living God?

Second, and closely linked to the first, is the oxymoron of saying in the same breath, “Not so, Lord!”  “No” plus “Lord” doesn’t compute.

Third, Peter’s reprimand of Jesus is driven by Peter’s expectations of Jesus.  Although Peter is so right about the identity of Jesus, he is so wrong about the mission of Jesus.  It would seem Peter expects the imminent arrival of the Kingdom of God – with Peter in a place of importance – after all, Jesus promised him “the keys of the kingdom of heaven,” and all that implies (16:19).

Contrary to Peter’s expectations, Jesus “must … suffer … and be killed … and be raised.”  Peter doesn’t get it yet.

Jesus not only foretells his impending suffering and crucifixion, but invites each of his disciples, his followers, to “come after me, let him [or her] take up his [or her] cross and follow me” (16:24).  In that day, a condemned person carried his own cross to the place of execution.  It was a well-recognized and strong metaphor.

Today, a similar image may be evoked by the words “dead man walking.”  In essence, Jesus invites those who follow Him to “come and die.”

Jesus is showing his disciples what it means to follow their lord.  It is about denying oneself (16:24), losing one’s life for His sake (16:25), not seeking to gain the world (16:26), and living in the expectation of future accountability and reward for a life well-lived for Christ (16:27).

What is there about following Jesus that we don’t get?

At this point, Peter doesn’t get what it means to follow Jesus.

Matthew has the habit of making Peter representative of all disciples, and so followers of Jesus recognize elements of themselves in Peter.  Read yourself into Peter’s actions and words.

Sometimes we say things about Jesus that are so right.  What we say we believe is orthodox.  We say a hearty “Amen!” to Peter’s statement that Jesus is the Christ, the Son of the living God.

But there are times when we say “No, Lord!”  That is when we argue with God.  We don’t want to go where he wants us to follow him.  Whether we are aware of it or not, it is at these times that we expose a crisis of discipleship.  We are so right about believing; but (just perhaps) so wrong about living.

Think about a time when you said, “Not so, Lord!”  What was he asking you to do?  Where was he leading you to go?  Revisit it with him.

Peter argued with Jesus.  Jesus responded to Peter firmly but graciously.  Eventually, Peter got it – and so shall we.

I conclude with a statement by Frederick Bruner:

“The Christian life is a ‘throwaway’ life, a life that in a great dare decides that Jesus is what life is all about and that following him is the greatest adventure in life.”[1]