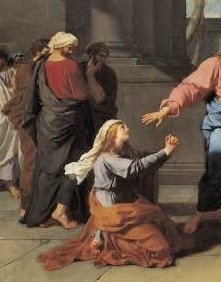 How do we understand the one occasion when Jesus loses an argument?

Why does he seem to be insensitive, even rude, to a woman pleading for her daughter’s healing?  Could it be that there is something more going on here?

The incident I’m referring to is reported in Mark 7:24-30 and Matthew 15:21-28.  The accounts are different, as one would expect from reliable independent witnesses.

As an example, if a painter and a carpenter inspect a room and are later asked to describe what they saw, we are not surprised the painter focused on the color, quality, and application of the wall coverings, and the carpenter focused on the shape of the room, type of wood used, and the fittings.

If we compare Matthew's and Mark’s records, we note that Matthew engages the disciples in this incident. We are not surprised by this focus, as disciples and disciple-making are significant to Matthew’s perspective. I have chosen to explore Matthew’s account.

Immediately before this incident, Jesus had been confronted by Pharisees and teachers of the Jewish law (Matthew 15:1-20) about religious purity regulations. They wanted to know why Jesus’ disciples broke a tradition related to ritual cleanness.

Jesus responded by pointing out specific areas in which the Pharisees and scribes subverted important laws such as honoring one’s parents.  He concluded his reply with: “You hypocrites!  Well did Isaiah prophesy of you, when he said:

This people honors me with their lips,

But their heart is far from me;

In vain do they worship me,

Teaching as doctrines the commandments of men.

No rebuttal is heard from these Jewish leaders, but “the disciples came and said to [Jesus], ‘Do you know that the Pharisees were offended when they heard this saying?’”

Jesus then teaches them about the essentials of purity: it’s about what comes out of the heart.  Isaiah was right on point: it’s about a heart for God and true worship.

That brings us to our present incident.

The previous incident involves Pharisees and scribes from Jerusalem (15:1).  They belong to the “right” people group, practiced the “right” rituals, and lived in the “right” city.  But their hearts were wrong – they were hypocrites.

By contrast, the present incident involves a foreign territory (modern day coastal Lebanon), a Canaanite (a historical enemy of Israel), a woman (perhaps a single mother with a questionable history).  Everything was “wrong” about this person according to traditional Jewish standards.

Do you find it surprising that Jesus “did not answer her a word” (15:23a)?  Why does he ignore her desperate request?

We read that “his disciples come and beg him, saying, ‘Send her away, for she is crying out after us’” (15:23b).  The best understanding of this is that they want Jesus to authoritatively tell her to get lost.

By Jesus’ non-answer, his disciples reveal their own ingrained cultural and religious biases.  Earlier, they were concerned the Pharisees had been offended – people they viewed as “clean.”  Now they weren’t the least bit concerned about the desperate plight of this Canaanite woman – a person they viewed as “unclean.”  Their biases needed to be uprooted and replaced with a deep sense of God’s mercy.

In light of what follows, we know that Jesus’ mission is not limited to those carrying Israelite genes.  So what does he mean by his statement?  Is he intentionally following the trajectory of the disciples’ bias and insensitivity?  If so, why?

Jesus answers in a way that appears insensitive, even rude.  He illustrates his stated priority by referring to Israel as “children” and non-Jews as “dogs”: “It is not right to take the children’s bread and throw it to the dogs” (15:26).

Third, her rebuttal (15:27): “Yes, Lord, yet even the dogs eat the crumbs that fall from their masters’ table.”  She does not contradict Jesus.  She addresses him as “Lord.”  She humbly accepts the epithet, “dogs.”  She respectfully uses his illustration, arguing the “crumbs” that fall from the table are freely available to “the dogs.”  In this rebuttal she shows where her heart is at: she honors Jesus; she loves her daughter.

This elicits an amazing response from Jesus: “‘O woman, great is your faith!  Be it done for you as you desire.’  And her daughter was instantly healed.”

Did Jesus lose an argument?  Some think so.  I wonder if it would be more accurate to say that he won by losing.  If that is so, what is won?

No fewer than three ‘wins’ flow from the resulting reverence and faith of this Canaanite woman.

(1) For her, she presses through to the experience of God’s mercy.

(2) For the disciples, they observe the difference between the Jewish leaders whose hearts are far from the Lord, and this Canaanite woman whose heart is toward the Lord.  They have to be asking themselves about what this means for Israelites, for themselves, and for their future ministries as followers of Jesus.

(3) For us/me, the reader(s), we watch and learn as we wrestle with understanding this encounter.  It seems to draw us out, causing us to ask questions, to examine (our) motives, to adjust the way we think and serve.  One question I ask is, “Am I biased toward my own people, and against others, on the basis of ethnicity, economics, education, or status?”  Do I favor people who are, say, middle class, Canadian-born, white, and educated (or whatever), and ignore people who are immigrants, poor, unemployed, diseased (or whatever)?

Was Jesus insensitive, even rude, to the Canaanite woman?  At first blush it appears that he was.  Yet his final statement and action tells us something else was happening.

Jesus frequently said and did the unexpected.

Concerning this Canaanite woman, he commended her faith and healed her daughter.  His actions, statements, and manner contributed to her demonstration of faith and her experience of mercy.  I will not presume to call Jesus insensitive or rude – after all, “love is not arrogant or rude” (1 Corinthians 13:4-5).  I will acknowledge that I don’t fully understand.

What have you been hearing and seeing from this ‘argument’ that speaks into your life?