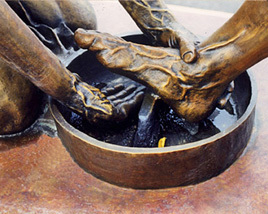 What is Jesus’ core teaching on leadership?

If I had to choose one text or concept, I would probably point to Mark 10:35-45. Take a moment to read these eleven verses.

If you’ve read what Jesus says in Mark 10, you’ll see that he contradicts much of what is found in popular resources on leadership available in North America today, even some leadership books with a “Christian” slant.

Two disciples, John and James, approach Jesus privately for privileged positions of power. Some may approve of their initiative – after all, if you don’t ask, you won’t get.

Their request comes on the heels of Jesus’ pronouncement (for the third time) of his impending arrest, torture, and death by crucifixion. The so-called “leaders” in Jerusalem—both Roman and Jewish—will direct these unjust and gruesome actions. We shouldn’t forget that Jesus also declares he will be raised to life—the resurrection—which overrides the best efforts of the political, military, and religious “leaders.”

Jesus asks the two brothers questions, and they press back with a “can do” response. Another laudable attitude in modern leadership material.

When the other disciples find out about this private audience, they are “indignant” with John and James. It seems the others were expressing their displeasure at having been outmaneuvered.

My conclusion is that none of them ‘got it.’ As yet, they didn’t understand true leadership—leading like Jesus.

What is the dominant model of leadership in our world? What are the prevalent ‘best practices’ for leaders?

Jesus features the leadership model of Romans, Greeks, and just about everyone else throughout history—even in our here and now. The Lord lays it out for us in Mark 10:42 (NIV):

You know that those who are regarded as rulers of the Gentiles lord it over them, and their high officials [in Greek, megas] exercise authority over them.

One commentary puts it in these terms: “they throw their weight around, and they … play the tyrant.”

This model can be dressed in the clothes of a benefactor:

“I load this burden on you and boss you around for your benefit—I do it for your own good.”

And so, these leaders consolidate power and position, and accumulate wealth and status. Sound familiar?

It is not too far off many approaches to leadership today, although they may be camouflaged or soft-pedaled. Whether it is the Roman Empire, the Soviet regime, a corporation, a family, or even a church, this basic model remains.

What does Jesus teach in its place?

First, the dominant leadership model is disqualified. Jesus states: “Not so with you” (NIV), or “among you it will be different” (NLT).

Any model of so-called leadership that advocates the use of power over, control over, manipulation of, or domination exposes itself for what it is.

He adds that a person who leads in the Jesus way is not just a servant (diakonos) but a slave (doulos).

R. C. Trench writes that a doulos is

“one that is in a permanent relation of servitude to another, his will altogether swallowed up in the will of the other.”

This is not a temporary condition until leadership is secure; it is not a figurative statement as if he doesn’t mean what he says.

Third, what does true leadership look like? Jesus not only tells us, but he also shows us.

For even the Son of Man did not come to be served, but to serve, and to give his life as a ransom for many.

A true leader not only serves those being led, but the degree of such service is also self-sacrifice. In Jesus’ case, it led to his death by crucifixion on behalf of others.

Here are three observations about Jesus’ core teaching on leadership.

1.         When our question is “Who is the greatest?”—we are showing that we don’t ‘get it.’ This may be spoken or unspoken. It manifests itself in many ways.

Jesus is not going to answer that question. Rather he is asking the crucial question: “Who is serving?”

If a person is seeking to be great (megas), that person doesn’t understand his or her relationship to the Lord Jesus. Do we tend to domesticate or tame what Jesus is saying?

3.         Jesus is not teaching mere theory. This is the stuff of real life. A ‘true’ leader is called to be serving those that are led. It is dynamic, effective, and real.

If you are not frightened by what Jesus is saying about ‘true’ leadership—you probably don’t ‘get it.’

Do you have something you would like to add? Write me using this link, and let me know.

BACK TO “The Primary Essential of Leadership”