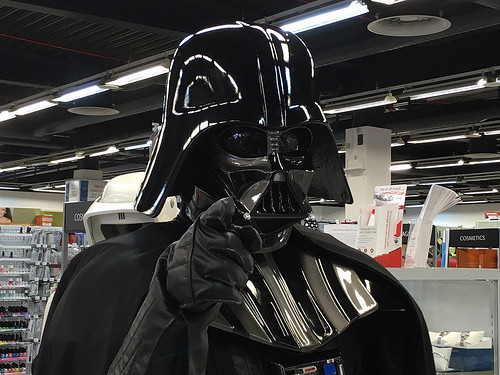 By your definition of a leader does Darth Vader qualify?

On several occasions in the last few years, people have proposed definitions of leadership. When pressed, they admit that even Adolf Hitler would qualify according to their definitions. So, why not Darth Vader?

How do you define “leader,” “leading,” or “leadership”? Does your definition align with the Bible’s description?

A lot depends on our presumptions. We all have them.

A presumption is typically a position or a “fact” that becomes part of our understanding of a particular issue. It’s something a person takes for granted. For instance, one of my presumptions is that there is a God—and that God reveals himself as Jesus Christ.

You may not share my presumption, in which case we probably will end up with different conclusions.

Based on this presumption, my perspective or orientation on whether something is valid is subject to three elements: the Bible; the person and work of Jesus Christ; and God’s character of love. If that “something” is inconsistent with any of these elements, it is not valid. I’ve written about this in a bit more detail in “Is that you God?”

So, any valid definition of leadership must be consistent with these three elements.

The English translation of the Bible I use most often is the New International Version. The verb ‘lead,’ together with the noun ‘leader’ and their respective variations, occur well over 500 times. Even the word ‘leadership’ arises four times.

The Bible has a lot to say about leaders and leading.

Parameters are limits. In this case, limits for defining leadership.

In “Leaders, Fools, and Impostors,” I started at the beginning—Genesis 1-3. Based on a careful reading of those chapters I identified three aspects of ‘real’ or ‘true’ leadership, as follows:

1. Under God’s sovereignty. God is the source of all power and authority—and we learn that he delegated some of this authority to humans to subdue the earth and to rule the animals (Genesis 1:28). This delegation implies human capacity and responsibility.

2. Toward God’s purposes. Humans were commanded how to use the power and authority God delegated to them. As God’s representatives, they were to use it in the same way that God himself would use it.

3. Within God’s boundaries. God set boundaries on the legitimate use of his delegated power and authority. A clear instance is the injunction not to eat of the tree of the knowledge of good and evil (2:17).

I’ve chosen this word to keep the alliteration of  ‘P’ in the titles.

What I’m getting at is the idea of calling this perspective on leadership “real” or “true.” In doing so, I’m trying to distinguish this particular perspective of “leadership” from other forms of authority and power that some might call “leadership.”

I’ve come to the conclusion that other forms we view as “leadership” are not leadership at all, despite what others may call it.

What about Adolf Hitler, the fictional Darth Vader, and others like them—even some (perhaps many or most) “in charge” of churches and religious institutions? Although some might refer to them as “leaders,” by any biblical measure, they are not leaders because they disregard or diminish God’s sovereignty, God’s purposes, and God’s boundaries. Among other things, they may be bosses, managers, masters, power-brokers, generals, dictators, oppressors, abusers, potentates, princes, presidents, fools, and impostors—but they are not leaders.

I make this point to emphasize the distinction between how God (revealed as Jesus Christ) leads and how others exercise power and authority.

For your consideration, here are a couple of working definitions for ‘leader,’ ‘leading,’ and ‘leadership.’

Although these definitions are probably counter-cultural, they reflect leadership as taught and modeled by Jesus.

Leadership is a dynamic process in which a man or woman with God-given capacity influences a specific group of ... people toward His purposes for the group.

taking the initiative to know God deeply, to reflect his holy character abundantly, and through loving relationship to draw people together to further his purposes in the world.

Each of these definitions is rooted in the presumption that God’s sovereignty, God’s purposes, and God’s boundaries are integral to leadership.

No doubt, this post raises some intriguing and important questions and concerns—not the least of which is, “How does this impact your life and how you lead?”

Have I gone too far? If so, where and how? What are your thoughts?

BACK TO Jesus on Leadership