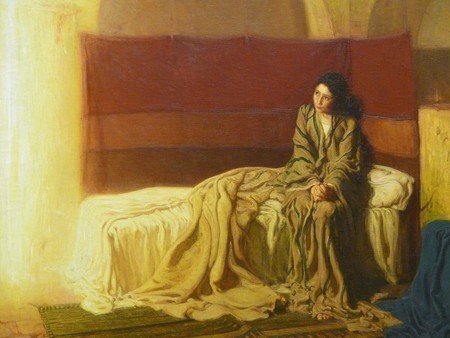 Could Mary have said ‘No’ to Gabriel, God’s messenger?

Gabriel’s announcement to Mary—the Annunciation—is recorded in the ancient and holy text of Luke 1:26-38. Take a moment to read and ponder this rich scene.

As you read, you’ll note that Gabriel used language that indicates—or at least appears to indicate—that Mary had no choice in what was about to happen. For instance, the angel used the word “will” numerous times: “You will be found with child” (1:31).

On the one hand, some refer to Mary’s statement as “an expression of resignation to the will of God” (Barnes)— Mary’s passive acknowledgment of an invariable sovereign decision.

God’s message, writes Godet, by the mouth of the angel was not a command. The part Mary had to fulfill made no demands on her. It only remained, therefore, for Mary to consent to the consequences of the Divine offer. She gives this consent in a word at once simple and sublime, which involved the most extraordinary act of faith … Mary submitted herself of her own free will to what she felt was the will and wish of her God.

The last quotation is in keeping with the Greek grammar of possibility and cooperation.

If Mary did have a choice—and it seems she did—what if she had said ‘No’?

Paul writes, “when the time had fully come, God sent his Son, born of a woman …” (Galatians 4:4). This holy text says, “born of a woman”; it does not say “Mary.” It is speculation on my part, but if Mary had said ‘No,’ Jesus would still have been “born of a woman,” but not Mary. At that point in divine salvation-history, the Son was sent; the Savior was born; God took on complete humanity (the incarnation). Nothing could frustrate that—not even Mary.

Again, this is speculation, and I might be accused of intruding into holy things. No doubt, the question “what if ...” calls for humility and reverence.

For sure, God’s ultimate purposes cannot, and will not, be frustrated. Will your ‘No’ simply, yet profoundly, mean that you exclude yourself from participating in what God is doing?

Let Mary’s words guide and encourage you: “I am the Lord’s servant, ... may it be to me as you have said.”

Let her words influence your mind and heart as you are invited to cooperate with God—whether in something small and apparently insignificant or large and utterly unimaginable.

BACK TO Will You Join What God is Doing?